What I Learned From FATS

You know, with a nickname like GunDiva, people kinda expect me to know one end of a gun from the other and, you know, be able to shoot said gun(s).  And I can.  Unless it's FATS training and both Jeffery Deaver and Lee Lofland are in the room watching my group.

I can honestly say, though, that once the scenarios started I forgot they were there.

Everything Mrs Mom's DH (Anonymous) wrote in the comments section of yesterday's pop quiz is true.

I've shot Defensive Pistol off and on for a long time; I've been under pressure from the clock and other competitors.  But that didn't do much to prepare me for FATS.  I had a hard time interacting with the screen - screaming alpha commands at it just wasn't working for me.  Lucky for me, one of the girls in my group had that down pat.  In Defensive Pistol, it's just one person killing all the bad guys.  Makes for a bad team player when grouped with others.  So, #1 and #4, I apologize for being a bit scattered.

I did okay with most scenarios, but there was one that raised my frustration level like you wouldn't believe.  The scenario was that we were called to a wholesale warehouse (like Sam's Club or CostCo) where a man with a shotgun was confronting an employee.  My frustration came when we couldn't get the person who called to shut up and get out of the way, then we were moved through the aisles until we came to the end of one.  I found myself peeking around the corner just like I would in a match, but the camera took us into full view of the bad guy.  #1 killed him dead; I followed a shot or two behind.

The other thing that frustrated me about FATS training was the lack of immediate feedback when firing.  I squeezed the trigger and had no idea where my bullet went.  I know that sounds horrible, and it was horrible.  Any time a gun is fired, the shooter should know where the bullet went.  I thought I had my sight picture lined up and I know I wasn't jerking the trigger, but I consistently was a little high on playback.

Despite my disorientation with the camera movement and my frustration with not knowing where my bullets were going, I loved FATS training.  It was excellent for shoot/no shoot training and made me really analyze what I was doing and why.  There were people that I didn't shoot (and correctly, it turns out) because they didn't feel like a threat, but I couldn't articulate why I chose not to shoot them.  However, I can absolutely understand why people would shoot them; their actions could absolutely be interpreted as aggressive or dangerous.

In the half hour we had with FATS, we must have shot seven or eight scenarios.  I can happily say that I did get better with every scenario and that I had an *amazing* head shot on a bad guy holding a baby in a car seat in one arm and swinging a machete with the other.  I fired one round and killed him dead.  I am also thrilled to say that no one in my group was killed or shot an innocent.

I thought we were going to get to see Jeffery Deaver shoot - apparently, he's quite the competitive shooter - but we moved onto the next round of simulation training, the VirTra simulator.

One scenario completely threw me for a loop.  I was called to remove an employee who had been fired, but was refusing to leave the building.  He was standing at his former desk, with a cardboard box of his belongings on the desk and he was flat-out refusing to leave the premises.  The problem was that I was giggling because all I could think of was the movie "Office Space" - I just wanted to give him his red Swingline stapler and usher him out the door.  Instead, he reached in the box and pulled out a Glock.  I knew he was going to eat lead a split second before he did.  I hesitated, not wanting to shoot him and be involved in a "suicide by cop" situation.  In the moment of my hesitation, he shot himself.  "Oh Shit," was all I could say.  That scenario was set up for failure - either I shot him to neutralize the threat or I let him shoot himself - either way he ended up dead.
Posted by GunDiva at 10:26 PM 4 comments:

In less than two weeks, I'm headed to the Writer's Police Academy in North Carolina.  One of the additional things I signed up for was FATS Training (Firearms Training Simulator).  Friday, I received this in my inbox...

Greetings, Recruits GunDiva and OtherRecruit. You have been assigned to a violent crimes task force. The officer in charge of this assignment is Commander JC, a certified Firearms Training Simulator instructor.


You both are commanded to appear at the entrance to the FATS training room (GTCC campus) on Saturday September 25, 2010 at precisely 10:15 a.m. You must present your FATS pass to the officer guarding the perimeter before entering (passes are included in the WPA registration packet). No pass, no entry. You will remain on deck as an observer of the preceding team until your shoot time of 11:00 a.m.

Remember, all suspects inside the FATS training area are considered armed and extremely dangerous, and they are not afraid of law enforcement. You are authorized to use deadly force to save your life and/or the life of others. The decisions are yours to make, but please spare the innocent. Not everyone is a bad guy! You'll have a split second to decide to shoot, or not, so use that time wisely.

Being the GunDiva, I saw the FATS training as an option when I registered and signed up without even knowing what it is.  I saw the words "firearms training" and immediately thought simmunitions training (NLTA - non-lethal training ammunition); it wasn't until I got the email that it dawned on me that the last word was "simulator".

I looked up FATS and it is, indeed, simulation utilizing a giant screen and real guns loaded with computer chips that interact with the software.  At first I was disappointed that I wouldn't get to "really" shoot someone with NLTA, but then I breathed a sigh of relief, because it also meant that even if the bad guy shoots at me, I'm not going to end up with welts and ouchies from the impact of the round.  I think I'm going to have a ball with FATS.

Has anyone ever utilized FATS training, and if so, what did you think about it?
Posted by GunDiva at 6:00 AM 8 comments: 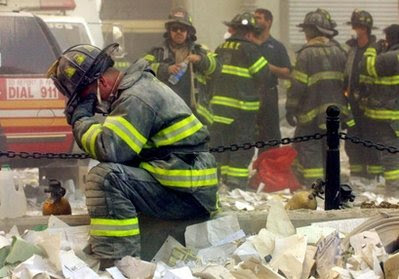 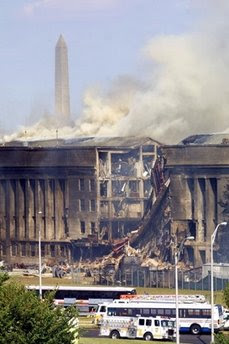 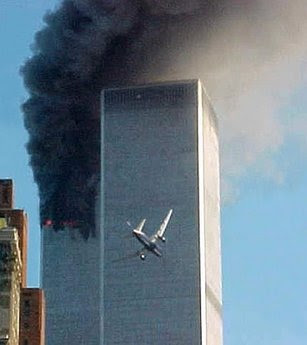 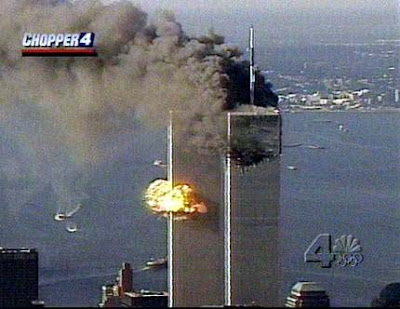 Neither will my family.

To the memory of those lost.

I have had the greatest weekend so far!  Went shooting with Tara on Friday, rode with Monster yesterday, and shot Defensive Pistol today!

I'm a bad, bad, bad GunDiva and didn't clean my gun or magazines after shooting Friday.  I only ran through about twenty rounds, so I didn't think that I really needed to clean the Para.  I also didn't think about cleaning my magazines, because I have to do it so rarely.  Funny thing, if you never let them hit the ground, you don't have to worry about dirt build-up.  Except...when I did the magazine change video, I put them all on the ground.  And then didn't clean them.

I'm not sure which contributed to the problems I had at the range today - the dirty gun or the dirty magazines - but I had issues with my gun not going into battery, so I had to smack the back of the slide more times than I should have to get it to go into battery.

That said, here are the videos - critique away.  I know which errors I made (not cleaning my gun/magazines being the biggest), but I'm interested to hear from some other shooters.

The first stage is "Twinkle twinkle" because of the Texas star at the end.  We started in position one and had to "slice the pie" from cover, hitting all of our targets with at least two rounds, then move to position two.  Since I was shooting from the left, I switched hands and shot left-handed as I sliced the pie.  (I'm comfortable shooting either right or left, but that took lots of practice.)  After clearing all of the bad guys from the right and left, we had to move to position three, the Texas star.  I usually do okay with the star - I don't know anyone who does really well with the star - but chose to take the time penalty instead of wasting time chasing the last arm of the star.


In this stage, we had to start from a semi-surrender position (true surrender position would have us facing away from the first target, pivoting and then drawing), shoot the first target from a retention position - just means one handed - as we moved back to cover, then slice the pie to shoot the other targets.  Then I had to move to the other side of cover (yes, I switched hands again), shoot the "tires" off of the car and put two in the driver's head.  I got a miss because I only put one in his head.  Bummer. 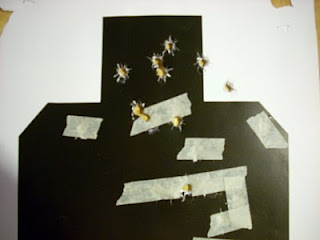 I threw one round to the right, but am pretty darn pleased with the rest :)
Posted by GunDiva at 6:00 AM 4 comments:

Lee Lofland, author of the Graveyard Shift, has graciously allowed me to link to his post about Cops and Guns.

Though his post is aimed at writer's, he's got good basic information that all gun owners and users should know.  Pop on over to his post and let him know GunDiva sent you :)
Posted by GunDiva at 10:03 AM 2 comments: