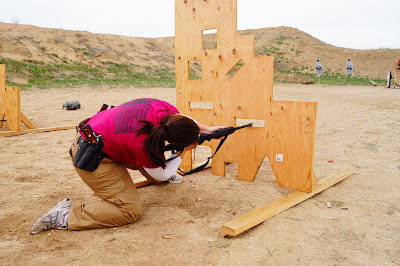 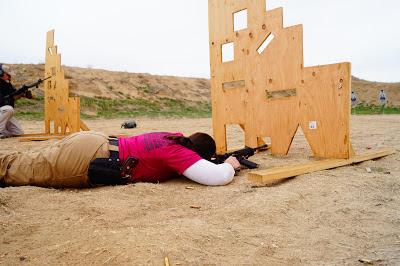 If this looks like a class you'd be interested in, be sure to contact Double Tap.  It's worth every penny.
Posted by GunDiva at 11:52 AM 6 comments:

Why Can't We Just Have Fun?

One of the biggest selling points for me when teaching others to shoot is that it's FUN.  I've always said if you can get the giggle, you've got the shooter.

It never occurred to me that there was an attitude out there that it wasn't okay for women to have fun shooting, that it was only okay for them to shoot if they choose to for self-defense.  That the only reason women would want to shoot is because they're afraid.  I can't say that I've ever run into that.

Obviously, other women have run into that attitude, as Natalie Foster discusses in her new video "Welcome to the Present".

She makes some valid points, go check out the video.
Posted by GunDiva at 3:02 PM 6 comments:

I think I've mentioned before that I have a problem with gun lust. So, I thought I would share my unrequited lust with others.
Go here: https://www.geminicustoms.com/ruger-revolvers/
Drool.
You're welcome.
Posted by Daddy Hawk at 7:02 PM 6 comments:

I know people are going bat guano insane right now when it comes to firearms and ammo, but enough is enough people.
A couple of months ago, I was looking for an 18.5" barrel for my Remington 870 shotgun because a 28" barrel, while manly and really awesome for dusting clays and small birds in flight, doesn't "slice the pie" as easily as one might think when stuff goes "bump, CRASH!!!" in the middle of the night. I located a suitable barrel at your friendly, internet hub of all things gunnie, Midway USA, but I was disappointed to learn that my intended purchase was out of stock. I was offered the opportunity to request notification via email when said product once again was in stock which I did.
That email arrived one hour and 15 minutes ago. Seeing as how I am at work and otherwise engaged in the business of covering my keister from the office politics of the day, I just now attempted to follow the link and see if my bank account would allow me to buy said barrel.
Turns out my bank balance is a moot point as said barrel is already out of stock. AGAIN.
Tease.
Back to the drawing board Wile E.
Posted by Daddy Hawk at 3:10 PM 9 comments: