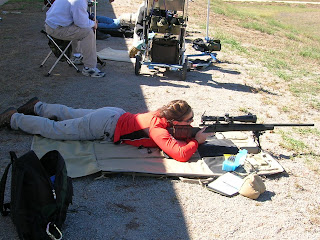 I was introduced to shooting in my mid-twenties by a former boyfriend.  I had taken a Hunter's Safety class in junior high and knew the basics of safe firearm handling, but had a big "ah-ha" moment and fell in love with the sport while shooting with the former boyfriend.  He had just purchased a new Glock 23 and we took it out to shoot.  He was having a hard time, shooting low and right, and, of course, blamed the gun.  He handed it to me and warned me that I probably wouldn't hit anything with it.  I got a good grip, lined up my sights and blasted the X-ring.  The heavens opened up and the shooting gods smiled on me and I fell absolutely, head-over-heels in love with shooting.

We continued to shoot together, with me falling in love with the sport a little more every time we went out.  He bought me my own guns to shoot with - a Ruger BlackHawk .38/.357 and a little Beretta Bobcat .25 cal.  The relationship ran its course, I broke up with the lying, cheating bastard and he began to stalk me.  After a couple of years, only after I threatened to kill him with one of the very guns he bought for me, did the stalking cease.

Fast forward to my 32nd birthday.  I was missing shooting and wanted a gun for my birthday.  My family all pitched in, bought me my own Glock 23 and I dove head-first into defensive shooting.  Because of my stalking history, I have a little different perspective, I think, than "sport" shooters.  All of my shooting training has been tactically based.  My first shooting class was taken from a man who had "been there, done that" in real life.

I've been lucky enough to shoot with, and be mentored by, some amazing shooters.  I've learned long-range shooting, tactical shotgunning and defensive pistol from those shooters.  Occasionally, one or two of those shooters will show up here on The GunDivas.

My real name is Shawntel Wilson, but I prefer to go by my nickname in the blogosphere.  I'm often asked where my nickname came from.  It came about because I found a shirt with "GunDiva" on it.  Of course, it was a little pink fitted shirt, but I had to have it, despite the fact that it was pink.  I wore it once while working at the gun shop and the name stuck.  I've been GunDiva now for more than a dozen years and have been finding fellow GunDivas along the way.