This quarter's training is shooting in low light. I dug out all of my flashlights and spent last night/today charging all of my lights. Seemed like a good time to make sure everything was ready. Thanks to the Year of the Lumen (2018), I have a few to choose from. Any time Greg Ellifritz or Dustin Ellermann posted about a new light, I had to buy it.


I knew we had some cool stuff planned, so I was pretty excited about tonight's range time. At twilight, I used the Streamlight I keep on my belt to look at something downrange and decided I didn't like the throw. I thought it was too short, so I decided to swap it out for one of the Ankers that I usually just keep in my bag.

When it was my turn to run the stage, I slipped the Anker into my carrier and threw my Streamlight in my bag. I've been practicing with the Anker at the range, since that's what's in my bag, so I thought it would be fine.

What I forgot about the Anker is that it has variable settings and that in order to keep it from cycling through the settings, I had to press the button to turn it on and then let go. Failure to do so, or keeping the button depressed with my thumb will start it to cycle.

I did okay for my first two targets, but when I went to light up my next two, suddenly I had a strobe light. I said bad words and took my shots anyway. But did I remember to definitely turn on and off the light? No, because why would my brain work when it needed to?

When I lit up my next set of targets, I'd cycled to medium power. That was okay, at least the light stream was steady. By this time, I'd remembered to fully depress the on/off button and let go, so my last few targets were easier to shoot.

It was ugly, but I learned a couple of important lessons: 1) don't make a last minute gear change (that should be obvious), and 2) commit to turning on/off the light instead of just using my thumb as a momentary on switch.

I don't have a holster that will accommodate a WML, but I have a really nice Olight that I wanted to try out. Once everyone was done shooting, I attached my Olight and just plinked off a few rounds. I've dry fired with the Olight, but while dry fire is great for practicing fundamentals, I needed some live rounds through. I found that my little Olight really lights up the target beautifully, but in order to activate the light I have to break my grip and really rock my support hand forward. My little girl thumb doesn't reach the switch well.

Again, I didn't commit to turning the light on, instead just used my thumb as a momentary on switch, which worked great for identifying the target, but as soon as the trigger broke and the recoil hit, my thumb lost contact with the switch and I lost my light. I either need to learn to keep my thumb in contact with the switch or hit the button to turn it on and let go.

I'm seeing a pattern here. I have trouble committing with my lights. Push the damn button, turn it on, and then get my damn thumb out of the way.

The one thing I do wish is that there was a way to get more low light practice. I do practice with my lights, but shooting on an already well-lit range with a flashlight is vastly different from shooting in the dark with one. Since I know my problem is not fully turning on the light, that's something I can work on even during the day. 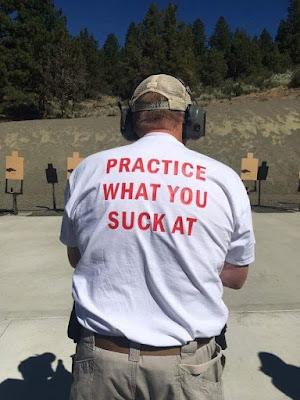 My hope is by practicing the one thing I screwed up so badly, that next month when I shoot at night, I'll see a vast improvement.
Posted by GunDiva at 10:48 PM No comments: