No Means No. Always.

I think we can all agree on that, right?

But "no means no" is usually associated with sexual assault. One person wants something, another doesn't, and we're all on the no means no bandwagon.

The problem is, though, that we, as a society, don't enforce this across the board. Here's an example that a friend of mine posted, along with her own story of being shamed for not drinking: 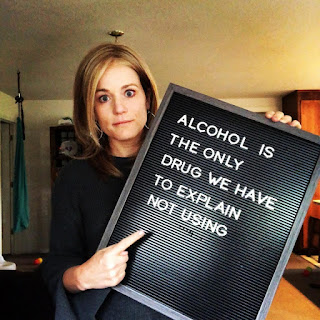 Here's the text that accompanies the picture. The gist of it is, people need to take no for an answer, even if it's something "trivial". There were example after example of people who'd been shamed for turning down something on the original post.

My friend's sharing of the post, along with her own story, brought about many comments; in fact, the friend who posted it even felt the need to say that she does drink, she just didn't want to drink then. That broke my heart. No one should ever have to explain why they don't want to engage in an activity. Many of the comments were helpful excuses to help curb the shaming. Comments with a qualifier, such as "no thanks, I'm driving", "no thanks, I've got to go get my kids". Reading the comments, I got angry. We owe no one an explanation once we say no.

I'll admit, I might be a bit sensitive about the issue, but I truly believe in my heart that no means no and that no is a complete sentence. Period. If I have a visitor, and I offer them food or drink and they tell me no, then that's it. I will usually say, "if you change your mind, just let me know", but I don't shame them. And I certainly don't badger them to change their mind.

A couple of years ago my boss found out my first name, which I don't use. I'm a middle name kid, always have been. I have to use my first name occasionally for things like airplane tickets, because it's my legal name, but it's not the name I use. My boss thought it would be funny to call me by my first name. I told her that my name is my middle name and that I didn't want to be called by my first name. But she thought it was funny and proceeded to continue to call me by my first name, in a van full of co-workers, even after I'd told her not to. Our co-workers rapidly got uncomfortable with her easy dismissal of my no, and my refusal to laugh it off; they were laughing nervously and shifting in their seats every time I corrected her.

She continued to insist on calling me by my first name (and thought it was funny), throughout that day and into the next before I lost my shit and yelled at her in public, in the middle of Temple Square. I'm sure the other tourists loved that.

I had set a boundary with my no and she continued to trample it, thinking it was funny.

Later that evening, we were at dinner with a co-worker. I ordered an alcoholic beverage, my boss ordered an alcoholic beverage, but our co-worker did not. To me, no big deal. My boss, however, refused to take no for an answer until he explained that as a diabetic, he couldn't drink alcohol. She then proceeded to look at me and say, "wouldn't it be funny if we just slipped him some alcohol one day?"

Here's the deal lady, no means no.

Those incidents really opened my eyes to how we might say "no means no", but rarely is it believed. In seemingly innocuous situations, saying "no" opens the door for negotiation. If that's the case, is it no wonder that people don't abide by the word?

I think, in order to change anything, we need to start with ourselves, to take an honest look at ourselves.
I've seen memes that say we train people how to treat us. If that's the case, we can change the power of our no. In self defense, we talk a lot about boundaries. Setting them, enforcing them. This is a boundary that we need to enforce at all times if we want to see any change.
Posted by GunDiva at 1:14 PM 3 comments: