The Politics of Guns: Interesting facts about the Aurora shooting

Another day, another shooting in America.  Yesterday, February 15th, there was a mass shooting in Aurora, Illinois.  (mass shooting being defined as 4 or more people being murdered) An employee who was about to be fired decided he needed to murder his fellow coworkers, for whatever reason.
He also wounded several police officers before he himself was killed by the police.

Here is how government failed:

1. The gun was purchased in 2014 in the state of Illinois (OK, not to problematic)
2. Illinois has a state level law that requires you to be licensed and registered BEFORE  you buy a gun.  It is called a FOID (Firearm Owner ID).
3. You must go through a background check in order to get a FOID card.  Though he had several arrests in the past nothing significant that would prevent him from obtaining proper licensing.
4. After he obtained his FOID card and purchased a handgun, he then applied for a concealed carry license.  (this is where things get interesting)
5. During the licensing process for his carry permit, it came to light he had a FELONY assault conviction from 1995 in the state of Mississippi.  HOLY SHIT-SNACKS! HOW DID THIS GUY GET A FOID CARD IN THE FIRST PLACE?
6.  At this point the Illinois State Police revoked his FOID card, which now prohibits him from even possessing any firearms.
7. By court order he was to turn in his gun to the police.  (which he obviously didn't do)

WOW!
So, we have a convicted felon that somehow slipped through the cracks and was allowed to purchase a firearm, even though Illinois has a state level licensing and registration system.
Then you have the failure of government by not actively confiscating his handgun once they learned he was a convicted felon.  And this is the most egregious failure in this whole story.  You would think confiscating a firearm from a known, convicted felon would be cause enough for the police to take action and go confiscate any and all firearms?  Well, guess not.  They relied on the murderers good faith to turn in his gun.
I guess public safety is not really that important to any of the law enforcement agencies of Illinois.  (still feel safe traveling to Illinois?)

Oh, you think this is a one off instance and that we need more gun control.  Well, here are more examples of government failure.

Parkland:
February 14th was the one year anniversary of the Parkland shooting.  The anti-gunners were out in mass screaming for more gun control.  But here are some inconvienient facts about Parkland.
1. The murderer had violent mental problems since kindergarten.
2. He had 33 contacts with the local police for violent outbursts.  And two calls to the FBI about  his violent behavior.  You would think the Coward county Sheriff (not a typo) would at least put him on the no buy list?  But no, they just let it go.
3. He purchased his firearm legally from a licensed dealer with a background check.  Gee, if the Coward county sheriff had done their job, Parkland may have been prevented.

Texas Church murders:
1. The murderer had a felony domestic violence conviction AND was involuntary committed to a psychiatric hospital while serving in the Air Force.
2.  So how did a convicted felony buy a gun at a gun store and pass a background check?
3. Easy, the Air Force, and other military agencies, do not report criminal data to civilian law enforcement.
4.  Government failure!

South Carolina, Black church murders:
1.   This whack job had a felony drug arrest.  Not convicted, he was awaiting trial.
2.  So how did he legally purchase a gun from a licensed dealer and pass a background check?
3. Easy, the arresting police agency filled out the paperwork incorrectly and the data never made it to the NICS data base.

So here you have four instances were convicted (or felony arrest) felons and were able to purchase a firearm from a licensed dealer AND pass the mandated background check.  How can this be?
Easy.  Here's the dirty secret no one wants to talk about, especially the anti-gunners.  The NICs database is missing upwards of 30% of the necessary data.  Not all agencies participate in supplying data to NICS.  (The military didn't until after the Texas church shooting).
So how effective will Universal Background Checks be when the database is missing 30% of the data?  Here's a hint, it won't be.  (but is sure will diminish your freedoms just a little bit more)

Why do we need more gun laws and further restrictions when the existing laws are poorly managed by government?  Why should we trust government to manage the new laws when they can't manage the laws they already have?
Now the anti-gunners are screaming for Universal Background Checks, ERPOs (extreme risk protection  orders) and New York state wants to view the last 2 years of your social media to verify you are not a whack job.
No thanks.  I'm not interested in giving up more freedom because the government (at all levels) can't do their job correctly.

I'm all for keeping guns away from the criminally minded and the mentally deranged.  But I'm not willing to give away all my freedom to do so.  I do not exist by the governments permission.  The government exists by my permission.   Rights are things we are born with, not granted to us by government or a piece of paper.

Bottom line:
Let's make the existing laws work FIRST then and only then should we re-evaluate and modify existing laws or pass new laws IF and only IF the existing laws no longer work.
We should also consider repealing dumb and ineffective laws.  (such as the 1934 NFA act.  especially since we now have the power of the internet and background checks)

No new laws are necessary.  When the anti-gunners scream we need more laws, you now have evidence that no we don't.

Time to push back and interject some logic and reason into the gun debate.

The good thing about SHOT Show, it is not just about firearms.  You do find other interesting items.

Here are two items we found.

First up, Nexoptic.  What these guys are doing is making electronic binoculars.  You have the optical clarity of traditional glass binoculars with the modern convenience of additional digital zoom and the ability to take photos and video.

Unfortunately I didn't take photos of it, so I'll just link to their website and you can see it for yourself.


The next item is something that really caught my attention.  Night vision and thermal imagers are all the rage now.  Everyone is coming out with their own version of this technology.  The biggest problem is the image is either that green color (for night vision) or various color scales for thermal.  You get a general image but not a lot of detail.
Well, how about if you have a full color image?  That would be useful.
In comes SiOnyx. They do just that.  Using a different sensor technology, they have created a monocle device that gives you a full color image.
It can be used as a stand alone device or attached to the picatiny rail on your rifle.

I've been looking for a good night vision device and this may be it.  Pricing is not outrageous either.  Starting at $799, it is very cost competitive with the competition.  I think you get a lot for your money.

Again, no pictures, but really innovative technology.  Go check them out.

in todays firearms world, everyone and their brother, sister, cousin, etc. builds an AR platform rifle.  If you buy from a reputable company you will get a good product. So how does a company differentiate themselves from everyone else?  Go custom configurations.  Something the big companies are not doing.  (But beware, doing custom work such as this is not cheap.  Fun, but not cheap)
Here are pictures from a couple of companies we came across.  Enjoy.


First up is Strike Industries.  This is my favorite of their rifles. 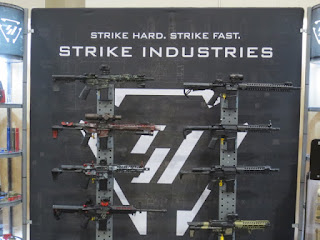 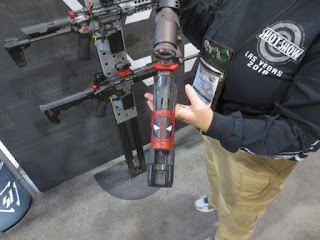 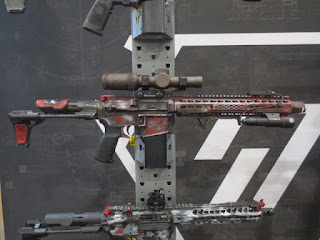 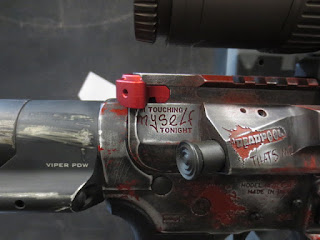 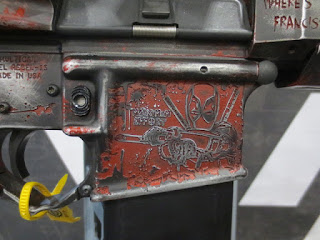 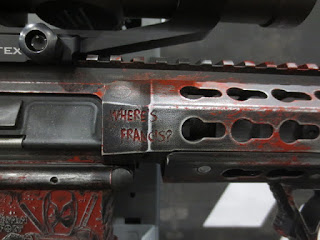 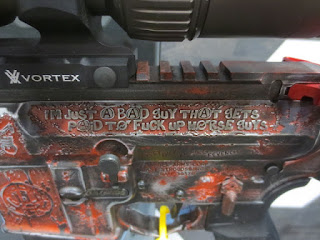 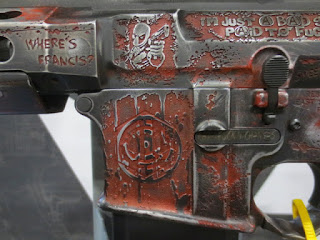 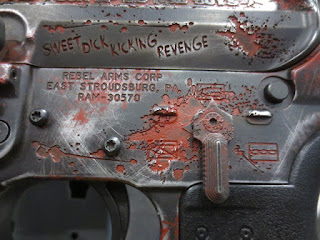 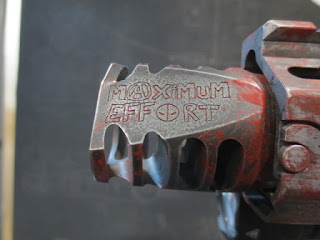 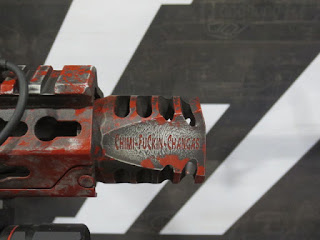 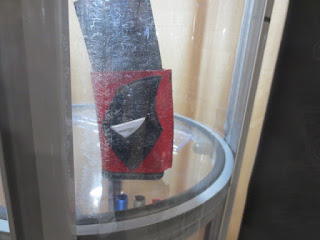 Next up is F1 Firearms.  These guys are more competition oriented as they offer skeletonized receivers.  Not the best for keeping dirt and stuff out of your firearm.  But it does make for a lightweight rifle.
One of the options they offer is multi-color hard-coat, multi-color anodization.  Which makes for a beautiful, customized rifle. 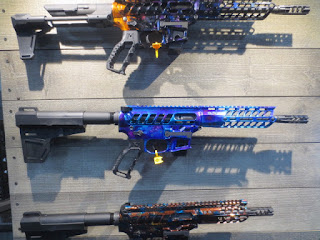 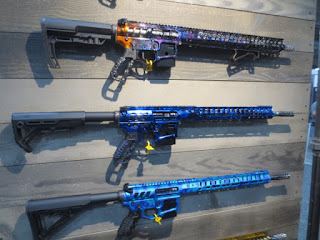 If you are tired of the plain old black, try a bit of color customization.

We had so much fun with the Facebook live videos last month, we decided to try our hands at doing a video every couple of weeks. We're not video people, obviously, but thought we'd give it a go.

Let us know if there's anything you'd like to see, learn about, well ... almost anything.
Posted by GunDiva at 7:45 PM No comments: