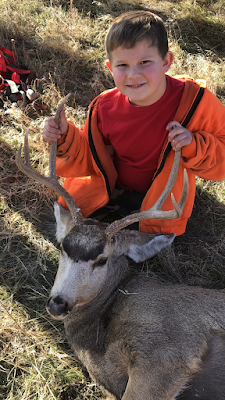 In November of last year I had a hunting license for an buck deer in unit 9 in Colorado. I was a bit hesitant to go because of a recent knee surgery, but my son had been asking me if I would take him out for his first hunting trip. Of course I couldn’t say no to him; he was so excited that he was big enough to go with me.

For the first couple of days, he and I would just glass around not far from the parking area, as I wasn’t able to do a lot of walking. After a little while looking through the binoculars, he would inevitably say there was nothing there and promptly fall asleep. After he slept for a couple of hours he would wake up and we would head home.

On the third day, after he said there was nothing out there I spotted a nice three point buck and he perked right up. After not seeing it at first, he finally followed my directions and was able to see what we had come to find. We slowly made our way to a good shooting location (me hobbling and him doing his best to mimic my movements) just under 300 yards from the deer.

As I lay down and got myself in a good shooting position, my son, Mikey, sat down against my left leg and was telling me exactly what the deer was doing. I asked him if he was ready for me to shoot, but he didn’t answer ( he was wearing ear plugs and ear muffs). I looked back and asked him again if he was ready, this time I got a big smile and a thumbs up. Now the pressure was on to shoot properly, ie a good heart and lung shot to make sure that the deer didn’t suffer.

I took the shot and heard him shout that the gun was so loud! I asked him if he saw the deer go down, and he replied that the shot had startled him and couldn’t say. I could plainly see the deer but Mikey was unable to find it. I told him that was ok because we would go to where we last saw it and look for signs of a hit or miss. I can honestly say that I don’t think I have seen that boy move faster in my life!

As I very slowly made my way up the hill side I was cheered on by my son a few yards away. After about 45 minutes of climbing I stopped and asked him if we were near where the deer was before the shot. To my surprise and delight he pointed to the rock that was behind where the deer had stood, and said it should be over there. 20 more yards of walking and my son started yelling that he found our deer.

After taking the required pictures of him and “his first deer” he grabbed the antlers and started to drag the deer down the hill. He tried his best but the brush was extremely thick and so I put two lengths of rope on it and helped him drag it the rest of the way down. Once down, I asked him if he wanted to help me field dress it. And of course he said yes. I told him to grab one front leg and one back leg and hold them up. As I was gutting it he was asking a lot of questions; what’s that, and what about that? And of course the inevitable what’s that smell? After it was properly dressed , he picked up a stick and started poking around the gut pile and going “oh that’s gross”, and I couldn’t help but laugh. After telling him what organs were each was, he pointed at the stomach which had blown up like a balloon and asked what it was and if he could pop it. I warned him that popping it would stink and it probably wasn’t a good idea, but he insisted so I let him pop it. He just looked at me and turned green. I’ll give him credit, he didn’t loose his lunch but the look told me that he understood why I told him that it wasn’t a good idea to do that.

On our way home he asked me if he could put the rack up in his room and when I said yes you would have thought I had given him the moon.

I must say, if you are ever given the chance to take a kid out hunting, DO IT!! There is no better satisfaction than to take a kid out into nature and show them the beauty of the outdoors while making memories that will last a lifetime for everyone.

Posted by GunDiva at 7:00 AM No comments: