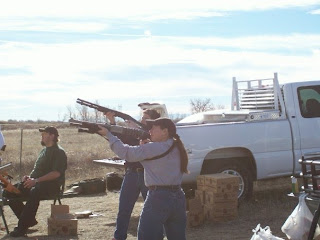 I was pretty excited to see this picture actually.  This was taken in December in '06 or '07.  I was out with my brother, Deejo, and several friends for one of our legendary "marathon" shooting days.  We took out our handguns and shotguns.  Take a close look at the *cases* of clays by the truck.  We shot them all.
The shotgun I'm shooting is one I built from the receiver up and is the one I called my 12-guage flashlight.  Tara Janzen built one just like it and it appeared in a couple of her books as the "Skeeter Special".  It is a Remington 870 with an 18 1/2" barrel, extended mag tube, side-saddle, and SureFire forend.  It weighed in (unloaded) at a mere 12.5 pounds.
The black shotgun my brother is shooting (you can't see it well) is one I built for him for his Christmas present.  His shotgun also makes an appearance in one of Tara's books, as Red Dog's shotgun.  Deejo's shotgun is also a Remington 870 with an 18 1/2" barrel, extended mag tube and side-saddle.  He declined the SureFire forend, saying it added too much weight to the gun.  Whatever.
Posted by GunDiva at 10:38 PM

Is it like un-redneck or something to admit I've never shot a shotgun??

You forgot the collapsible stocks and pistol grips. And the mercury recoil systems and slings. They are some BADASS shotguns.