I *finally* made it out to the range to try out FitShot with live fire.  I've been substituting weights for my guns at the gym for a couple of weeks, keeping in mind the point was to be able to do it with something that went bang.

Tara and I went out to the range and I realized I'd have to modify what my plan was.  Some idiot, who will remain unnamed, left her gun belt at home.  Not a huge deal, as the holsters I packed were paddles, but I couldn't add my second mag carrier because it's a belt carrier.

It was a brisk 42* at the range, with no wind.  That, right there, is a miracle.  There's almost always wind at the range.  The intro to FitShot calls for doing the sit-ups and squats with a carbine, but since I don't have one, I used my handgun instead.  Also, I was supposed to do release push-ups, but without my belt on, my holster kept sliding around my waist, so that I would have been laying on it.  I didn't want to grind dirt into my gun, so I went with regular push-ups instead of release ones.


I felt like I was moving fairly quickly through everything, but once I watch the video, I can see that I can shave off a whole lot of time by being more efficient in my movements.  I got spoiled doing this in the gym; there, everything is nice and level and easy.  Not easy at the uneven range, but a whole lot more fun!

Tara even had us running and shooting, but since we were both doing it, there's no video.

I would highly encourage everyone to try to incorporate some form of fitness into their shooting routine, because, let's face it, when the fecal matter hits the air circulating device, our hearts are going to be thumping and our fine motor skills are going to be shot all to Hades.  Might as well doing something proactive to give us the advantage.

I forgot to post my target when this post went up, sorry.  The target's not as gorgeous as it could be, but I'm not too upset, as this is a whole new exercise for me. 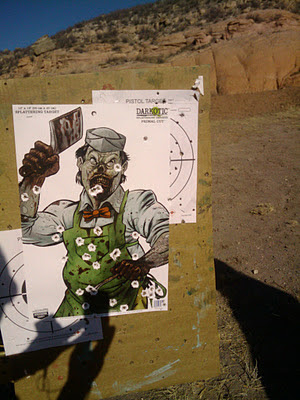 And don't forget about the give-away at A Girl and Her Gun.
Posted by GunDiva at 4:43 PM

That looks like a great workout for the gals (and guys) in blue!

If the target was the size of a school bus and 10 paces away, I might even be on paper.

Well, half the time...
Bill

Oh! I forgot to post my target. I wasn't as accurate as I'd hoped, but it was not bad for my first time trying this out.

That looks fun! Wow, great idea. I don't think my indoor range is gonna let me do this though. Maybe I can convince my neighbors to evacuate and let me try it here:)

agirl - maybe you could talk your indoor range into "adopting" it and have a Fit Shot day once a month :)

Or you could try to talk your neighbors into evacuating.