Thank you to Lynne at Female and Armed for the goodies that arrived in the mail yesterday!  I got a button with her web logo on it, which will go on my range bag...

...and a coffee cup that says about the most true statement I've read (and have uttered many times myself)..."A Bad Day At The Range Beats A Good Day At The Office".  All I can say to that is, AMEN!

Since last year, I've made it my mission to learn to shoot as well weak-handed as strong.  Let me tell you, it has been a struggle, but I'm getting more and more comfortable with it.

Though the process is the same as for strong-hand mag changes, I did find that I had to adapt a couple of things.

First, I don't have an ambidextrous magazine release on my gun, so I had to work my way around that.  I found that I could use the middle finger of my right hand to push the mag release and then pull the magazine out that way. 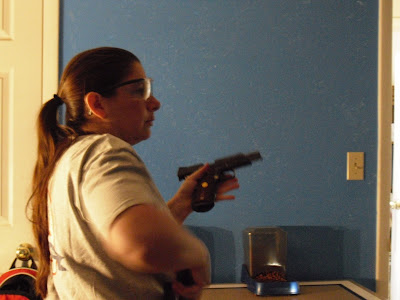 Reloading the magazine is the same as doing it strong-handed for me, so that went well.
It took some thought, though, for me to regain a proper grip.  For eight years, my right hand has been the one wrapped around the grip and my left has been supporting.  I can think it through and know that my left hand is the one with gun contact and my right is my support, but getting those darn hands to do what I told them took some doing.  It will be a lot more weak-handed practice for me.

I fumbled around and got my grip re-established, then brought my gun back up into my line of sight.  I'm so used to using my slide lock release that it didn't occur to me to pull back the slide to release it (because the recoil spring is so heavy, it's very difficult to do).  I finally used my left index finger to release the slide, which worked beautifully.
Unless your gun is fully ambi, there will be some modifications that you'll have to make when shooting weak-handed, but I think it's a skill all shooters need to acquire.
Posted by GunDiva at 8:00 AM

Home on the Range said...

Very good advice. I alternate left and right hands, not every time I'm at the range, but often enough I don't feel like my left hand suddenly belongs to someone else.

This was some of the best advice I got when I first started shooting...practice with both hands, often and I do. I have a Glock that is set up for a right handed shooter, but I am left handed, so I actually had to make the adjustment with my strong hand, but I was surprised at how quickly I was able to adapt.