While at SHOT Show, Mez and I talked to the folks from Multiple Impact Bullets.  I was intrigued.  Having been in medicine for the better part of my life, I wanted to know what on earth the tethered fragments would do to a body.  I had seen videos of people shooting paper targets with them, and the targets always ended up with a neat little Y-incision like in an autopsy.  I wanted to know what it would do to tissue, only I didn't want to know badly enough to get shot with one.

I considered testing them on a pig body, but came to my senses when I priced what a pig would cost.  Same with a side of beef.  Way too much money for something I wasn't going to be able to eat when I was finished with the testing.  That left ballistic gel.  Ideally, and in a perfect world, I would have bought one of these, but I'm pretty sure that if a dead pig or cow was out of my budget these would be too.

That left me with making my own ballistic gel, as the blocks you can buy weren't big enough to do what I wanted to.  The spread of the Multiple Impact bullet in a .45 ACP is 12", and out of a 12 ga shotgun is 24".  The 6"x6"x16" FBI blocks weren't going to be big enough to catch the spread, and at over $100 a piece I wasn't willing to buy enough to stack to make a big enough block.

So to the Google I went and found this recipe.  It look simple enough, and I had some time on my hands.  I wasn't worried about the depth of penetration of the rounds, I wanted to see how or if the tethers tore through the soft tissue.

I bought enough of the ingredients to make four gallons of the stuff, to be divided into pans that were 19"x11.5"x3".  I figured I could stand them side-by-side and it would almost be big enough. 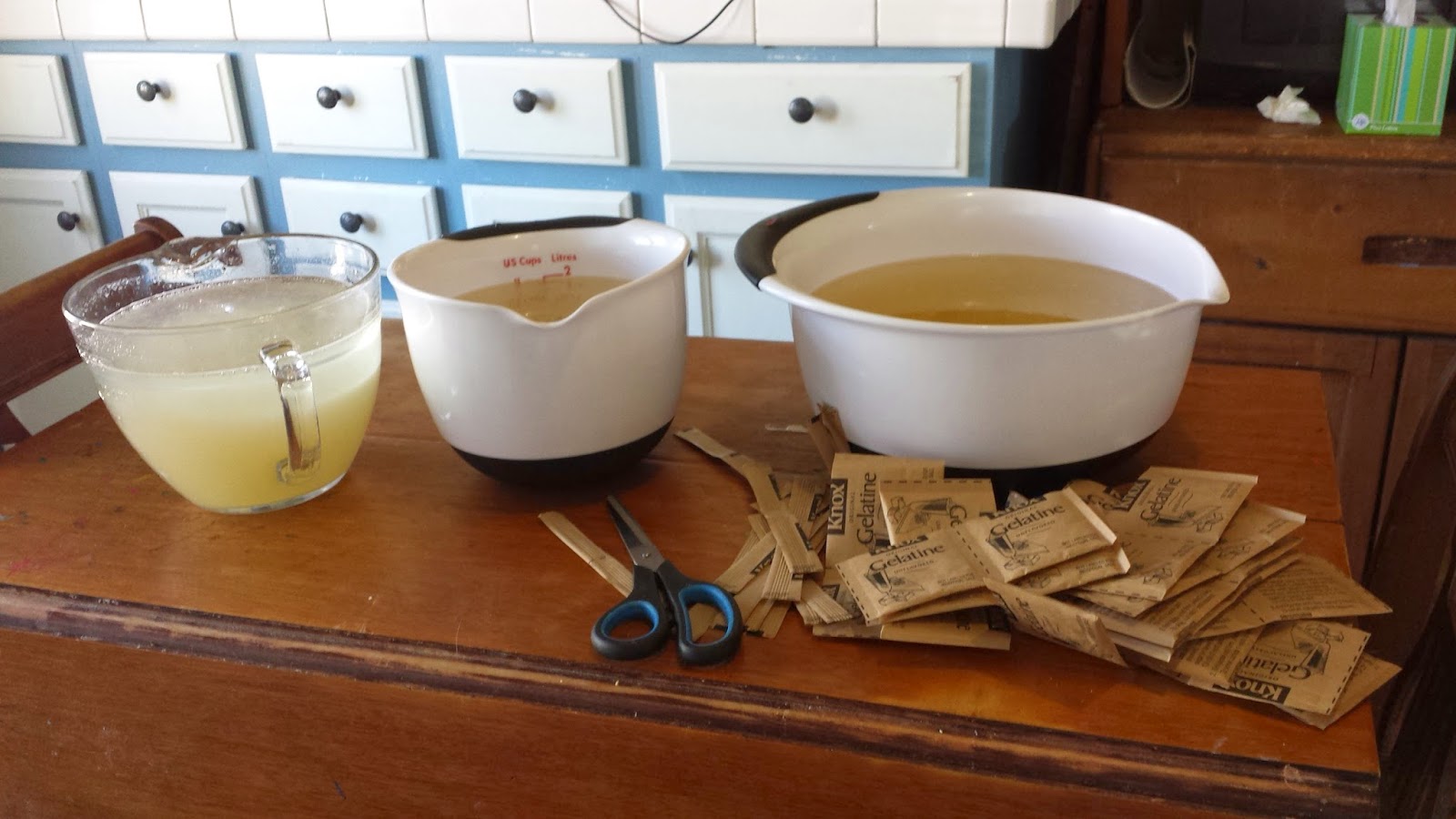 I did not adequately plan for the amount of fridge space that making so much gel would require and condensed all of my food to one small shelf and the crisper drawers.

It was a fun experiment and if I ever decide to do it again, I'll decrease the amount of liquid in the gel to firm it up a bit more and use a better size form.  I think it would have been more stable in a block rather than a sheet.  It mostly served its purpose and we were able to get some video and pics (which will be posted later, as I have a lot of footage to edit and I'm very slow at it.).
Posted by GunDiva at 4:15 PM

Cool experiment. love your adventurous spirit. I should have taken you to autopsies. LMAO.