Why A "Women's Only" Class?

That was my question when the GunDiva asked me to assist her in teaching a Women's Only class.  All my classes had been with guys, with sometimes a woman or two sprinkled in.  Hence, my shooting philosophy evolved into: "Chances are, if I'm ever in a real self-defense situation, I'll be up against a guy. So it's a good idea to be shooting with guys." 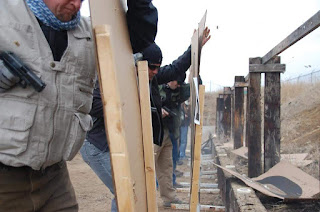 For example: If you look closely,  maybe you can see the tip of my boot about halfway down this line of guys.  We're blasting away in a CQB - Close Quarters Battle - scenario.  For the record, there is another woman at the end of  this line, the instructor's wife.  (I  have a strongly held belief about shooting with husbands and boyfriends, and it's DON'T - but that's a different blog post.)

Back to the Women's Only class - I, of course, said Yes to the class, because it was the GunDiva asking - a great opportunity for me to learn something, too.

So off I went to the first class with my preconceived notions about "Women's Only" classes firmly intact - e.g. Are we catering to the idea that women can't hold their own in a class with guys?  Is it true that women are intimidated by men, and therefore we're going to "coddle" them into being good shooters?

Three classes later, this is what I observed:  Yes, it is true that some women, especially those who are new to shooting, don't want to start out shooting with men.  But it's not because they are intimidated by men.  It's because they know these three things:

1.Women who sign up for a shooting class know they don't know everything about shooting.

Please read Robbie's "Where Are the Lady Hunters" post from September 17, 2018, paragraph 4.  To paraphrase - Women are better "students of shooting" than men. (I have heard this many times from other male instructors.)  They keep an open mind.and are open to suggestions.  Men can fall prey to the idea that they already know everything about shooting.

The women in the Women's Only classes did not interrupt the instructor to highlight something they knew that the rest of the class was just learning. They did not ask questions"above the level of the class" to prove how much they knew, or thought they knew,  which can  be a disservice to the other students, especially if the instructor gets sidetracked without finishing up the original idea.

The women in all three classes cooperated with the instructor, letting her be their guide, helping to create a very positive learning environment and a very positive experience. 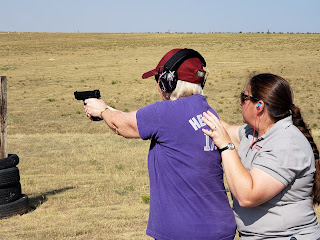 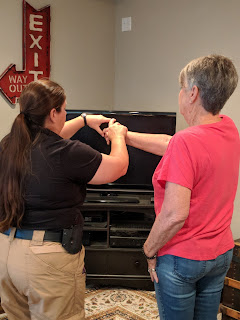 2. The women knew they were in the class to learn.  They were not there to compete with each other.  They weren't there to prove anything, except perhaps to themselves.

3.  Many of them knew what it was like to go shooting with their husband or boyfriend.  And at best, they shot a gun and learned a little, enough to whet their appetite for more knowledge.  At worst, a woman shooting with her husband or boyfriend will have a miserable experience and learn nothing, because husbands and boyfriends are rarely qualified shooting instructors, very , extremely  rarely.  One exception is the husband of the woman you can't see at the end of the line in the photo at the beginning of this post.  Her highly qualified shooting instructor husband treated her like everyone else.  She held her own, kicked butt for two days, and did a great job of shooting.

The class was AWESOME!

All I can say is, I've been shooting for more than a decade, and I wish I'd had this class before I ever picked up a gun.  What I learned from the class is that what intimidates women about guns are the mechanics, the literal, physical mechanics of the guns, not other shooters who may or may not be men.  Guns are powerful tools, "power tools," and most women don't spend their lives working with power tools.

So GunDiva broke it all down for us, starting with a cutaway animation on "How Guns Work" - everyone loved it.  You could see the "lightbulbs" going on all around the table.  I've never had another instructor understand how important that one simple bit of teaching could be.  GunDiva also explained the different kinds of guns and had pictures - and through it all, she was giving us the language of guns, the language of shooters in the simplest of terms, stuff it took me far too long to sort through, because in most "Beginning Classes" this is all presumed knowledge.  The same with "What is a Safe Direction In a Gun Shop?"   That generated a lot of great questions, and GunDiva had well-formed answers that increased the confidence of each one of the beginning shooters.  She made them feel safer about handling guns.  More than that, she actually made them safer gun handlers.

During the hands-on part of the class, the students had the opportunity to load magazines and rack the slides on the pistols we were using.  These can be initially awkward and/or difficult moves.  But we took the time to get it right.  Took the time for the students to feel comfortable with those mechanical manipulations of the weapons, before we went out to the range. 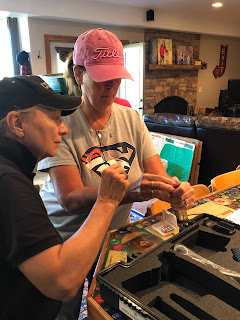 And even though this wasn't a marksmanship class, everyone shot pretty darn well, and a few were excellent! 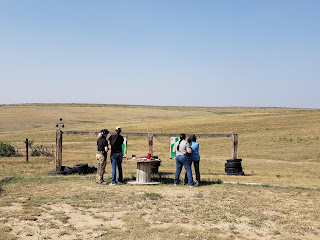 In truth, I know men who aren't mechanical, don't work with tools, and don't have a clue how a gun works.  They probably need their own class, too.  Maybe a "'Men Who Can't Run A Power Tool' Only Class."  And I can't help but wonder:  Will they be intimidated by women shooters?