Almost as long as I've been shooting, I've been looking for gloves that work for me. I know that a lot of guys like Mechanix gloves, or 5.11s, or really any "tactical" glove available on the market. I know people who buy a pair of generic gloves and then cut the tip of the shooting finger off so they can still feel the trigger.

I've tried everything that's been suggested, from the designated shooting gloves, to altering other gloves, but I've never found anything that worked. I eventually gave up. After two decades of dicking around with gloves, I just quit even trying. The only time I wanted to wear gloves anyway was during the winter, and I just avoided shooting outside in the winter. I figured I'd done my time shooting in cold, crappy weather and I could choose not to. In fact, I made a rule: I didn't shoot outside if the temperature was less than my age.

And then I joined the Posse. I knew my horse and I would have to attend training during the winter, so one day, while at a horse expo I picked up a pair of riding gloves. They weren't super warm, but they fit well and I was able to tack up my horse and ride in them.

Sometimes I'm a little slow, I'll admit it. It wasn't until months later, when I was packing to attend a week-long pistol instructors' class, and realized that I'd need gloves that it occurred to me to try the riding gloves. Since I'd completely given up on trying to find gloves to shoot in, it never crossed my mind to try them.

I used those gloves the entire week of class, in rain and snow, day and night. I was able to effectively manipulate my gun, including our outage/malfunction drills, without a problem. Two years later, I'm still using the same pair, though they're starting to show some wear. The thumbs on each glove are looking abused from wearing them while loading mags, but otherwise they're still in great shape. 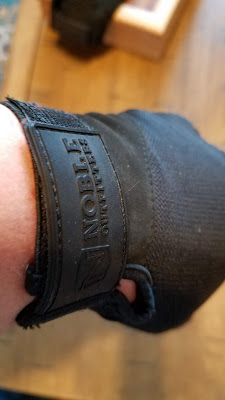 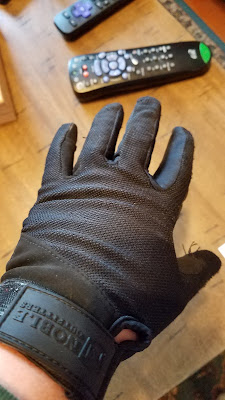 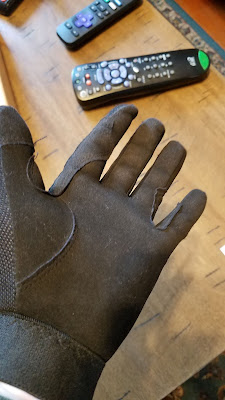 Everything that makes them great horse riding gloves translates into them being excellent shooting gloves. The leather on the palms helps with grip, the reinforced area between the thumb and index finger helps protect from slide bite, and they come in actual sizes, not just small, medium, or large.

They're not going to protect your hands as well as tactical gloves, but they've worked beautifully for me. I really only wear them during the winter to help keep my hands warm and to protect them from all of the little cuts and dings that tend to happen when you're hands are too numb to feel, but they're comfortable enough to wear year 'round if shooting in gloves is your thing.

This pair is from Noble Outfitters, and cost me around $20. If you're like me and have trouble finding gloves that fit for shooting, maybe take a walk through a tack store. Stay away from the work gloves, and look for the show gloves. They come in a ton of different colors and are designed to be abused by riders and their horses, so I think you'll find they hold up to gun handling pretty well.
Posted by GunDiva at 7:10 PM