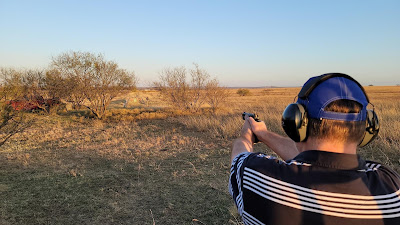 I didn't realize until it was posted on Facebook that my best friend had taken the above photo of me shooting his Stacatto (formerly STI) C2 9mm 2011 at a range of about 55 yards. We were out at his property for the first get together since too long before COVID came along and ruined everyone's year shooting a little bit of everything. He brought along his brace of very nice 2011s (3 Stacattos and a Chambers Custom), and I brought along some .22s and my Glock 30. We had been shooting mostly at 10-20 yards just knocking the rust and cobwebs loose. Somewhere along the way, he decided to walk things back a good bit. I decided "Why not?" I had never, to my recollection, attempted serious target shooting with a handgun at ranges beyond 25 yards.

Much to my surprise, I was ringing the green, half sized, steel silhouette target without any real trouble at all with both my Glock and his Stacatto. To be honest, getting hits with a commander sized 9mm 2011 can be done more consistently and easier than with a compact .45 ACP Glock, but it CAN BE DONE! Even though I have had access to ranges longer than 25 yards for many years, it had never occurred to me to practice at distances longer than that. I mean, I've read articles about it. It just never dawned on me to give it a try for myself.

So, why would anyone in their right mind want to try and shoot a handgun at that distance or further? Well....1) 'cause 'Merica dang it, 2) as far as 55 yards sounds, it's still close enough to be "in imminent danger and in fear of your life" in the self defense context should someone point a weapon in your direction with intent to do you harm, 3) handgun hunting is a thing or so I am told, 4) smoke...noise...do the math.

I think shooting on public ranges (indoor or outdoor) tends to ingrain certain limitations on our perceptions about what is/is not possible with a certain firearm. So, this year, I intend to make a concerted effort to step outside my comfort zone and stretch the boundaries of my thinking and abilities when it comes to firearms. I may never have a chance to drop a deer at 600 yards with a ,44 Magnum (as Elmer Keith claimed to have done), but it'd be nice to be able to say that I COULD make that shot if it presented itself.

What are your goals for the new year (besides finding ammo)?

Long range with handguns can be done. For a lark, I took aim at a 12 inch steel plate at 100 yards with a Sig P238 (pocket .380). Yes, you can hit at 100 yards with a pocket pistol. But it wasn't easy. only about a 30% success rate. Had to aim a foot high and the sights covered the target. It took some work.
Yes, I agree, challenge yourself and push your limits.

Daddy Hawk, you are so right about self-imposed limitations. It's really easy to do, especially when practicing at an official range with specific distances. I know I'm not great with a pistol at 25 yards. I can hit, but it's not pretty. Can't say that I've ever tried anything longer than that. Guess I'll give it a go next chance I have.
-GunDiva