A little problem back in December had me looking for a new belt. The problem? I'd lost enough weight that when I put my usual belt on, the tongue overlapped too much and I couldn't tuck it in under my magazine carrier. Normally, I don't wear an external magazine carrier, so hadn't noticed my belt had gotten too big. Luckily, that day, my velcro under-belt for my duty belt stepped in and saved the day. 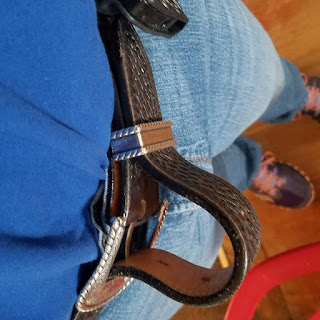 I knew I'd have to buy a new gun belt, but had no idea what I wanted. I have a couple from GunGoddess and I love them, but they're Western-styled and I'm not always about wearing my Wranglers and boots. I wanted to find a quality gun belt that I could wear with regular jeans and tennis shoes. As I was whining to Jay about it, he told me he'd just ordered a belt from KORE.

Now, as you know, I'm hardly a girly-girl, so the fact that it's KORE Essentials For Men didn't bother me one bit. All I needed was an EDC belt that didn't look like my old 5.11 training belt. While I like my 5.11 belt, it is not for every day wear. At least not for me. I looked through the options and found a belt that looked like it would work. I don't think it's overly "manly", and it doesn't really scream "gun belt" to me.

I had Dave Spaulding's Kinetic Pistol class looming and knew I needed a good quality belt for class and that my current belts weren't going to work, so I placed my order. 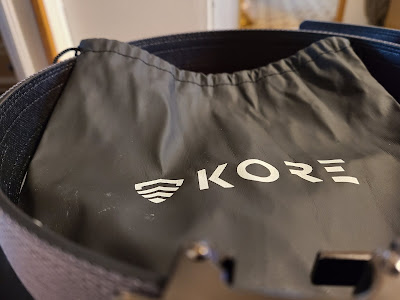 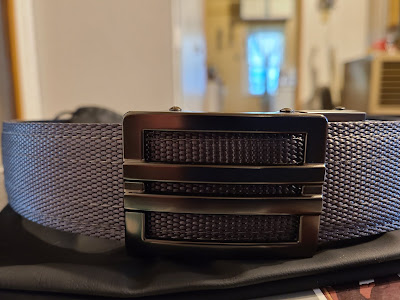 Weirdly (for me, at least), you don't order the belt by size. You choose the belt and the buckle you want and they send it to you, and it's up to the customer to cut it to size. They include instructions for determining the correct length to cut it down to, dependent on whether you are planning to OWB or IWB.

This might be fairly straightforward for men, but it was a little trickier for me. Women's pants are stupid. Some ride just below the waist, some ride just above the hips. And I'm not talking just jeans, even my 5.11 pants ride differently. One pair is at my waist; one pair just above my hips. Depending on a woman's build, the difference between the waist and hips can be inches. Because of that, finding the right length to cut the belt down was difficult. It took me a couple of tries to find a length that worked with all of my pants, OWB and IWB.

I managed to get it cut down to the right size a week or so before I left for Phoenix, for Dave's class. I knew using the belt in a two-day class would make or break it for me - by the end of class I was either going to love the belt, or hate it.

One of the cool things about it is that there aren't any holes for a belt buckle, so you can adjust it in 1/4" increments instead of the traditional 1" increments. It makes finding "just the right" tightness easier. I'd worn the belt for a few days before class and knew it was comfortable and that I liked it, but was looking forward to putting it to the test in class.

For two days, the belt remained comfortable and distributed the weight of the gun and extra magazine very well. I did find that if I wanted to wear my mag carrier as close to centerline as possible, that I had to clip it onto my pants first, and then run the belt through it, but that was an easy solution. It probably had more to do with the tight clasp of my mag carrier than the belt.

Before I got my KORE belt, when I wanted to IWB appendix, I had to almost wear my gun in a cross-draw position. The larger belt buckle of my go-to gun belts meant that I couldn't easily carry my gun on the right side (about 12:15) and ended up having to carry it on the left (about 11:45). That wasn't super comfortable, so I was extremely excited to be able to move my gun back to where it was most comfortable.

Prior to taking Dave's course, I'd worn the KORE belt with an OWB holster in class to teach with, and was pleasantly surprised that when I had to use the bathroom, the holster didn't slip. With all of my other gun belts, as soon as I buckled to unzip, the weight of the gun would pull on the belt, threatening to flap over. With this belt, the holster and gun didn't even think of moving. It was like magic.

As far as EDC belts go, this one was worth the money. It's sturdy enough that if I had to rack my gun off of it I could do it without a problem. It's comfortable enough to wear all day. And it's adjustable in 1/4" increments, so if it becomes necessary to loosen it, it's easy to do. And I've mentioned that with OWB, I don't have to worry about my gun/holster flapping around.

If you're looking for a good EDC belt, and you're not worried about finding a belt for women, this was a great investment.