Last year, when I was in my "I'm gonna get in shape and run" phase I began running on trails in the foothills.  The problem with that was that there are rattlesnakes in the foothills and I don't really like rattlesnakes.  So I decided a needed a bra gun and I had just the one in mind: a Beretta Bobcat in .25 cal.

I'd had a Bobcat, named "The Noisy Cricket", way back when.  However, like most of my guns from that time period, I had to sell it.  I did really love that little gun.  It went everywhere with me.  So when I needed a new bra gun, of course The Noisy Cricket was the first gun that came to mind.

However, when I went to the gun shop and had some to think about it, I decided that I would "upgrade" to the .32 cal Tomcat.  Unfortunately, I had to wait until I had an extra $465.00 to buy my new gun. Drat that whole "budget and need money to buy stuff" business.  Finally, a couple of weeks ago, I finally brought my new baby home.


She's got a couple of features that I love, love, love.

First - and simply for uniqueness' sake - I love the pop-up barrel.  This feature, as I understand it, was to make it easier for people who didn't have the hand strength to cycle a slide to chamber a round in a traditional semi-auto.

Second, I love how easy she is to clean.  Even easier than cleaning a Glock.  Pop the barrel up, run the slide backward and pop it off.  That's it...field stripped.  Takes about three seconds. 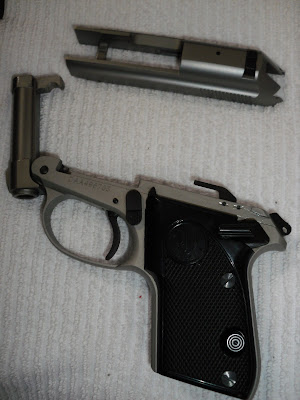 Perhaps my favorite thing about Baby Girl is how she fits my hand.  You know how important I think gun fit is. Before deciding to go with a Tomcat, I dragged Jay all over looking for a bra gun. A lot of pocket pistols that I've handled just weren't comfortable.  There are several new-ish ones out there that are getting a lot of attention, but I don't like them.  At all.

She's not super accurate yet - we've still got to get to know each other.  She's combat accurate in that all eight shots are within an 8" x 8" area at 15 yards, but she's no tack-driver.  Since I bought her primarily as a snake gun (the slithery kind) to wear while running (stop laughing, it might happen again), she'll be perfect.

A .32 isn't exactly a self-defense round, but it is sufficient for a "get out of my face" encounter (you know, for the two-legged variety of snake).  The only problem is that ammo is so damn expensive.  $26/box of 50.  That's more than I used to pay for a box of .45!

Now that I've got my new Baby Girl, I've got to start with the holster shopping.  I've had my eye on a Marilyn from the Flashbang line, but am open to other options. Anyone have any suggestions?
Posted by GunDiva at 4:48 PM

I too would love to find a comfortable holster for my baby .45, an AMT backup, it fits my hand and I love it. The off the shelf one I have, just puts it to high on my hip, and it feels top heavy. Thought about having one custom made, but my last quote was $175. So.... I will be interested to hear the ideas!

I'm considering having 13 Zulu make a holster for her if I can't find a Marilyn that fits her. My problem is that I wear scrubs at work and an IWB would just drag at my drawstring, so I'm fairly certain I *have* to go with a bra holster or a belly band.

So, if you get a flashbang holster for it, would that make your Hooter Shooter?

Daddy Hawk, I suppose it would :)

I'd be interested in what you end up using, GunDiva! I have the Tomcat, for similar reasons...running/working out (not so concerned about snakes, really).

But I gotta find something to put it in, and I don't know if a "Hooter Shooter" will work for me. I may be looking at a belly band. :(

Need me one of those!So cool and perfect for the hills.

Ohhhh, thanks for this post!! I am a brand new reader and I have been eyeballing this gun. Great info.