I couldn't believe it when I looked at the date of the last post and realized it's been over a month!  Today is the monthly defensive pistol match (which I won't be attending) and I haven't even debriefed last month's match.

Each year I challenge myself to shoot one match with my left hand.  Last year, I sucked horribly.  Nothing went right and though I completed my challenge, I was dead last by a long shot.  I have confidence in my ability to shoot with my left hand, because I sort of practice it.  Not a lot, mind you, but I do practice.  Enough so that I don't break out into a cold sweat when the match director announces that a stage will have a support-hand component.

On the first stage (which we don't have video of, darn), I completely buggered up a magazine change.  I know how to do mag changes left-handed.  I even wrote a blog post about it a few years ago.  My mind went completely blank and I juggled the gun back and forth between my hands; I couldn't seem to remember that my mags were on my right hip instead of my left and it was just a hot mess.  After that, though, it was smooth sailing.  When the scores came in, I placed 5th out of 8 in my division.  I even managed to beat, time-wise, 7 of the high-cap shooters.  (I always, no matter which match it is, compare my times to the folks with the 10+ round magazines.  In theory, they should be shooting faster than me, with almost double the capacity, so it always makes me happy to beat some of them.)

The "real" reason I've been absent for so long is that I was working on finishing/editing/publishing my first novel, HUNTED LYON. ( I released my first non-fiction collection of short stories at the end of August, in honor of my mare, Estes).  HUNTED LYON is a book I love.  It might not be some people's cup of tea, but I love the main character.  When the antagonist engages her, he doesn't realize he has bit off more than he can chew.

I *love* strong female characters and I wanted to make this one not only strong, but capable with a gun.  There are lots of female main characters out there who aren't so smart about guns, they're either untrained or afraid of them or have the wrong mindset, so my goal was to develop a strong female character with the right defensive mindset, not one who bumbled her way through.  I wanted my main character to be more like Skeeter Bang or Red Dog than Stephanie Plum and I like to think I accomplished my goal.


Here's the back blurb:

Stacy Lyon is happy with her life. She has her twins, her boarding stable, and is well on her way to achieving her dream of becoming a large animal vet. Other than her relationship with her boyfriend, Stacy's life is going exactly the way she planned.

Unwittingly, she's drawn into a twisted social experiment that tests her physical and emotional strength.

Her life will never be the same.

I don't like pimping myself out, but if you're interested in a novel with a bit of an effed up antagonist who chooses the wrong woman to mess with, feel free to jump on over to Amazon.  HUNTED LYON is available in print ($10.99) or Kindle version ($2.99). 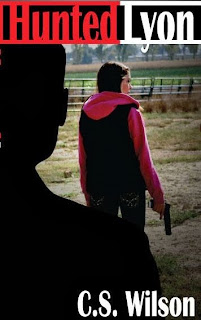 I was going to call you a slacker, Babur then you throw down with the whole I've been working at being a published author thing. Go on. Be successful. Just remember us peons once in a while.

I've totally been a slacker. I have lots to say, lots of things in my brain, but haven't put my butt in the chair long enough to get them down.

I did, however, write a main character I'm proud of. Antigunners are going to HATE my book :)