Mez and I had a little range time today. It's the first Sunday of the month, which usually means Defensive Pistol, but neither of us were feeling it, so we went to my friend's house and shot out there instead.

I love my little G42. I still need a few hundred more rounds with it to be completely proficient, but I was doing okay at 15-ish yards. I just love that it fits my hand so well; after years of struggling with my G23, it feels good to pick up a Glock and shoot it without having to do the "juggle".

I was itching to get my hands on Mez's G43 and about snatched it out of his hands when he offered it to me. Yep, love it too. My first six rounds knocked out the center of the 2" Shoot N C at about 10 yards. My next eight were with a mag with a magazine extension. I did not shoot so well with that one, I think because the Glock mag extension sucks. Instead of allowing your pinkie finger to follow the same angle as the rest of your hand, it juts forward. My group widened from less than 2" to about 4". Just to test my hypothesis, I switched back to the standard magazine and drilled another sub-2" hole. Guess I won't be buying any mag extensions for my G42 if they're made anything like the ones for the G43. 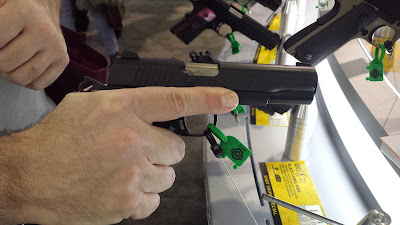 About a month ago, Mez found one and picked it up. I love, love, love this gun. As much as I love my Glocks, I really love my 1911s. I currently have two: my Para-Ordnance LTC and my GSG 1911-22. I love them both a whole lot. Picking up this Browning 1911 was like going home. It felt amazing and, despite the fact that the sights are stupid, I shot the shit out of that little gun. Immediately, I started thinking that I should get one for myself and switch to it from my G42 for my carry gun.

Mez must have seen my excitement building, because he said, "I want to show you something before you get too excited." That's the equivalent of "we need to talk" in my book and my heart sank a little bit. He field stripped the gun and handed me a plastic guide rod. Are you kidding? That sweet shooting little gun has a freaking plastic guide rod. 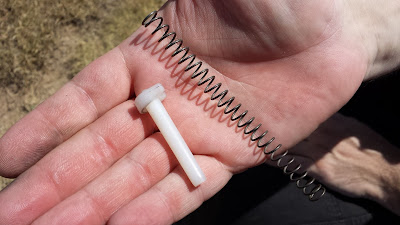 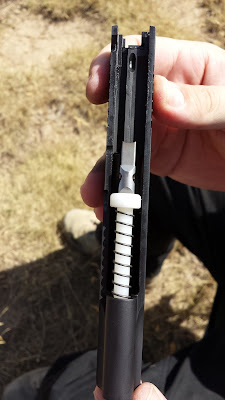 As far as my Google-fu can tell, there isn't an after-market metal guide rod replacement and I'm not certain I want to depend on a gun with a plastic (excuse me, polymer) guide rod. It's kind of an expensive little gun when compared to the Glocks (though I thought it shot like a dream) but this scares me. If I do decide to get one, I'd definitely immediately buy a replacement just to have on hand. It will be interesting to see how many rounds it cycles until failure. It might be a non-issue, but I'm not 100% certain I want that in my carry gun.

Mez will go much more in-depth in his reviews he's working on, I'm sure.

But, dang it, I love that little gun. *sigh*

When we were done with the pocket pistols, he broke out his sexy new toy (sorry, I didn't get all the particulars, but I'm sure he'll share when he gets that post written). I believe it's a Desert Tech .308 with some fancy glass on it. 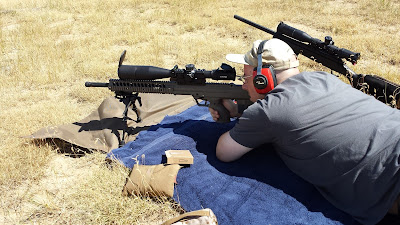 Such a great way to spend my Sunday; I hope you all have a great Labor Day and get some pew time in.
Posted by GunDiva at 8:37 PM

Great day at the range. I will look for that review because that gave me a wtf moment.