Tara and I try to get out to the range every Friday. More often than not, we don't make it. Lives get in the way, don'tcha know. When we do get out, its fabulous, but this last time was even more fabulous than usual. We had five guns and no time constraints. I'm not sure it gets better than that.

Since we haven't done much shooting, and since the last time we went out we both shot like we'd never held a gun, we worked on the basics. I didn't bring enough dots for the Dot Torture, so I made up my own drill.

I was a bit high on each of the targets T5-T7. And who the hell knows what happened on T8. 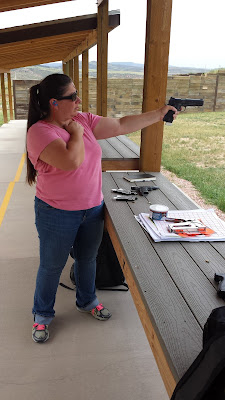 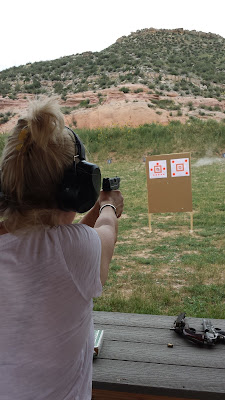 After I finished my round (and felt pretty good after my performance with the Dot Torture a couple of weeks ago), I played with some of Tara's guns. Boy, I love those cowboy guns. Love them. Unfortunately, they're an expensive habit I don't need to take up.

And just for shiggles I emptied my last magazine at the middle of the target and called it a day.

Remember when I said we had a fabulous day? Tara mentioned that she needed some work with the AR to get more familiar with it and I remembered that Double Tap had the sim up and running, so to make our day even more fabulous, we headed to FiTS.

Double Tap put her through her paces with accuracy drills before running her through some scenarios. 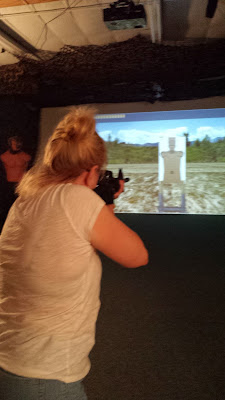 When she got tired, I took a turn. I did pretty well. The two tactical rifle skills classes I took were helpful. It's been a year or so since I took my last AR class, but the repetition in class helped build some muscle memory that I was able to tap into. There's another class coming up that I want to take, but it conflicts with an event I'm in charge of, so I can't attend.

It will be another couple of weeks before our schedules match up and we can hit the range again, but I'm looking forward to it.
Posted by GunDiva at 8:31 PM

Ah. Love that fact you had all those choices and played around. Fun Day!