Son of a Son of a Submachinegun.

I once watched a review of the S&W MP15-22, by Colion Noir, as being a fun gun to shoot and own.   I must admit I have one and have always thought it one of the most fun rifles I own.   Every time I take that rifle out I get a big ole smile on my face and want to shout, “WWWWEEEEEEEEEEEE”.   I recommend this firearm at every turn, totally a fun gun to own and shoot.   In this same vein of gun ownership I write about the Sig Sauer MPX-P.   This is a totally fun, versatile pistol that has many of the same advantages as the M&P15-22.   It’s relatively inexpensive to shoot, points quickly, light, easy to operate with the same controls as the AR-15, and allows for the addition of accessories to make it very uniquely yours. 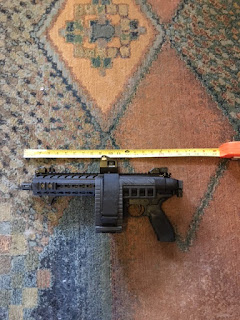 The MPX-P is classified as a pistol, utilizing the Sig arm brace at the end of a side folding tube.  With the side folder closed, the overall length of the 9mm pistol comes in at a respectable 17 inches (8.5” barrel), and fully extended gives it a length of 27 inches, making it a compact pistol with many applications.   The gun draws on its short history as a new entry into the submachine gun world, as competition to the venerable HK MP5 series of submachine guns.   The Attraction of the MPX in this field is most noticeably the manual of arms.   This gun’s controls look like an AR15/M4, and operate as an AR15/M4.  Adding to this familiarity, the gun comes from the factory ambidextrous in safety, magazine release, and  bolt release!   The charging handle, safety, left side bolt release, and trigger are AR15.   The charging handle is shortened to accommodate the shortened cartridge length, but the operation and shape are the same you know and love.  The safety is very plump and can easily be found with thumb, finger, or knuckle depending on how you train.   Lastly the trigger is reportedly an AR15 trigger, but a careful read of the manual indicates it really isn’t.  The trigger is “basically” a standard single stage AR 15 trigger with a crisp break, and proper reset.  The hand guard is equipped with Key Mod style front end and comes with a very simple fore arm stop to prevent the shooter from over reaching the muzzle.   The top receiver comes with  picatiny rail from muzzle to pistol brace, for your favorite red dot style site and other accessories.  The gun comes equipped with flip up sights front and rear.   Rounding out the list of factory features is a single point sling mount in the rear part of the receiver, the sling is included, and a left hand thread flash hider.  The gun comes with a single 30 round magazine made by Lancer for Sig. 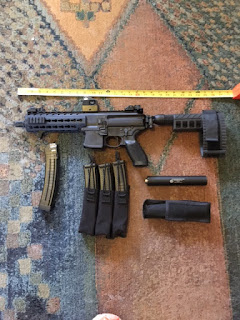 I see this firearm as being very versatile and fairly easy to feed and maintain.    I purchased the gun to run incognito in my laptop bag with the folding brace, the gun easily stores in a standard back pack used to cart around laptops, with room for your laptop.   My pack carries two 30 round magazines for the MPX-P, and 2 for the handgun I carry, as well as a suppressor (and laptop).   However, this gun could also handily serve as a home defense firearm for shooters concerned with over penetration from either 5.56, or buck shot.   My MPX took the place of an AR pistol that was tasked with the same job, but had to be stored in 2 pieces for the length of the backpack.   At close quarters the gun is very easy to utilize when wanting to put multiple shots on target quickly.  In my vehicle carry scenario, the MPX was much faster to put into service than the AR taking into account the time spent assembling the AR.   A secondary benefit is the space needed by the magazines and the weight savings of similar loads.

The gun is easy to control and put rounds where you want them.   I adorned mine with a Burris Fast Fire II red dot site and was able to sight in the gun with a group that was coverable by a nickle at 7 yards, 21 feet, typical distance used in self-defense training and shooting.  My zero consisted of 6 shots.  I shot 100 rounds total (suppressed and unsuppressed) and experience no failures to fire, feed or other malfunction.  My particular pistol is a 9mm, but the gun is also offered in S&W .40 and .357 Sig.    The gun is easy to control when firing rapidly, and accurate when targeting deliberately. 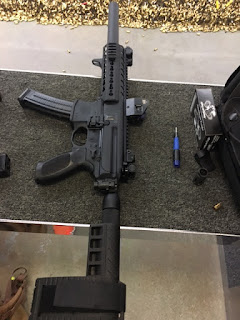 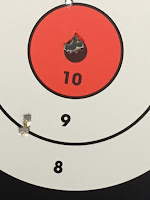 From an innovation standpoint, not much on this gun is totally new to the AR shooter, it’s all been around, and AR’s have been offered in 9mm for many years, which all makes this gun seem familiar to the AR enthusiast.   The gun does utilize a short stroke piston for activating the bolt, and the sub gun fires from a closed bolt.   The piston system keeps the bolt carrier group relatively clean after extended use.   What was new, to me, is the bolt carrier.   The recoil springs are mounted to the top of the bolt carrier group, with the fore end of it otherwise looks similar to the AR/M4 bold carrier.   The bolt installs into the upper in a very intuitive way.   The gun fits well together, no contortions, force, or extra pieces were experienced from take down to cleaning, to re-assembly. 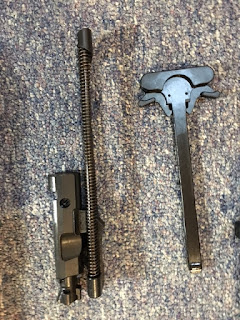 Take down is also very AR like.   Remove the two pins and it comes apart as an AR15 does, however upon opening up the front hinge point, the handguard is easily removed over the front of the gun, and reveals the 2 screws that attach the barrel to the upper receiver.    My understanding is that a replacement barrel can be purchased and the caliber changed at this point.

In case you can’t tell by now, I’ll shamelessly plug I’m a fan of this gun.  The gun is simple to use, small to store, allows me to use most of my AR accessories, and utilizes the same ammunition as my carry gun.  I get dual use from my 9mm suppressor, which allowed me to skip suppressing my AR….err for now anyway. 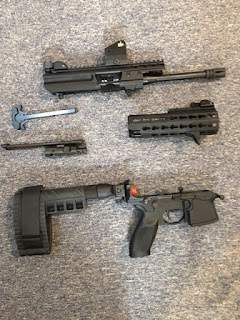 While I do like this gun, I am going to circle back around to the magazines.   One magazine included with a gun of this expense is a bit of a rip off.  Additional mags are advertised on their web site for about $70 a piece or 3 pak for $169, but if you register on their web site, and receive their emails, they do offer frequent discounts of 15-20% off, and stores north of the border carry them at less than retail price.   Sig does seemingly jab you on the cost of their magazines.  Magpul are you listening?

If you like Sig Sauer handguns, you’re going to love this one!  The gun has many features you’ll love and putting rounds down range will make you smile and sing out,”WWWWEEEEEEEEEEEEE”!!  Your face will break into smiles and this gun will make you want to play tunes on steel targets.  This gun is, dare I say it, sexy as all get out!

If you’re not a fan of Sig Sauer, you’ll probably note that 9mm AR’s are certainly available with many of the perks and capabilities they do offer, at maybe a similar or less price point.   If you are willing to Franken-gun a Glock 17 or 19 with a bunch of strap on kits and call it equivalent, please do not leave any comments, just walk away, and maybe sign up for a remedial art class at your local community college.

and check out Lina Miculek with the full auto version.  https://www.youtube.com/watch?v=d6tRUYfq6KQ