I decided my new bow needed a name, so Baloo Bear it is. Now let's see if I can manage to not sing "Bear Necessities" every time I take him out for a range trip.

Just being generous and sharing the ear worm. Enjoy :)

Before the storm arrived over the weekend, Jay and I went to the archery range. I wanted to get Baloo sighted in, and Jay wanted to dress his bow up. While his bow was getting his accoutrements, I did my best to get my bow sighted in. 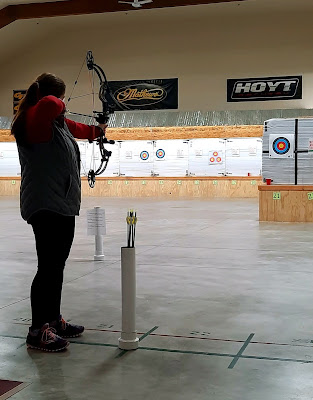 It's opposite of sighting in a rifle, so I had to think a bit each time. I was told to "chase the arrow", so after my first three shots were down and to the right, I had to move my sight to the right. Still seems backward to me.

It didn't take too long to get the windage correct, by just moving the sight a bit at a time. As long as I paid attention to my form and release, I did okay, but there were times when I screwed something up and had a flyer.

I'd like to say that the ones in the yellow were intentional, but I think that was dumb luck, as I was just beginning to adjust elevation. I didn't do a ton of shooting, only about 20 at this point, but shoulder fatigue was starting to set in.

I wanted to dial in elevation just a touch more, so let fly another few sets of three. One set was freaking awesome! Unfortunately, it highlighted that I might be consistent, but not accurate (yet). 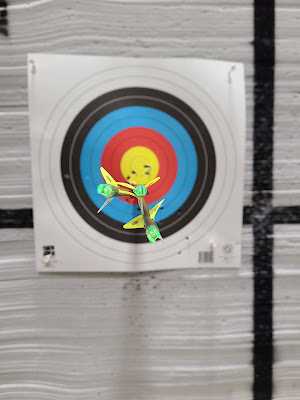 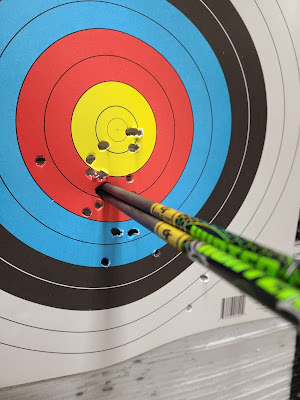 I couldn't duplicate this if I tried! Love me some beginner's luck. About that time, Jay's bow was ready and my arms were shaking, so I thought it'd be a good time to wind up. I'm not sure if my elevation is correct or not. There are some decent shots in the yellow, and I felt like I was pretty steady on those three, but could have been dropping them due to muscle fatigue.

One more trip to the range with fresh shoulders should get us dialed in.

I'm excited to join Jay at some of the nearby outdoor ranges this summer!