In January, 2021, GunDude Mez and I packed up and headed down to Arizona to take Dave's Kinetic Combatives course. We met up with GunDude Drew, who flew in, and spent the weekend in absolute crap Arizona weather. I wish I was kidding about that.

Unlike my classes in 2020, which Drew kindly gifted to me, I actually paid for this class. In fact, I loved the Adaptive Pistol class so much, that as soon as I finished up, I started looking for open slots in Dave's 2021 schedule. I tried for the Kinetic class in Laramie, WY, but that already had a waiting list (and it's not even scheduled to run until September of this year), then I found a class in Arizona that still had space. My plan was to drive down and stay at my brother's place. Mez missed out on the Adaptive Pistol class, but I managed to talk him into joining me for Kinetic Pistol.

I was excited for January in Arizona; I thought I'd get out of the Colorado cold and enjoy a few days' worth of shooting. Winter chose to visit Arizona that week, and we were cold and wet for the entire class. Luckily, I am a Colorado girl, and while I bitched about shooting in shitty weather, I've done it plenty of times in the past.

The skills learned in this class were different from the Adaptive class, which makes sense, since Kinetic means movement. We did a lot of learning to move with and around our guns, how to divert our muzzles as we moved, actual pivots to check our 360.

We started with dry runs of the drills, so that corrections could be made by the instructors, before we went live.

Dave broke everything down into bite-size pieces, so that we'd get a handle on one skill before we moved onto the next. I love learning in "baby steps" like that, and often teach my classes the same way. From moving and shooting, we started in with explosive movements. This is where I am lacking. Between the Adaptive course and the Kinetics course, I'd lost about 20# and was in much better shape. However, I'm still not fast. Some people are high speed, low drag. Me? I'm more no speed, all drag.

In fact, the feedback I got from Dave was that I could shoot okay, but man was I slow. Yep. Gotta work on that speed thing. The good news is, that I am getting better, more explosive off the line in any direction.

Despite the small setback I had in the Adaptive course with my holster breaking and having to change to an entirely different set up, I found the Kinetic course much more challenging. Certainly the caliber of student was much higher in the Kinetic course than in the Adaptive course, so I had to work harder to hold my own. I mean, when the class is headed up by Dave Spaulding, and assisted by Rich Nance, you're gonna attract a different caliber of student than a regular class. It was like the who's who of the shooting world for the weekend and I was just honored not to be run off the range.

With Dave retiring next year, I'm glad to have been able to take at least two of his courses. He's doing only two classes in 2022: one at his home range, and one in Colorado. I've got my money set aside ready to enroll the second that class opens up in June. It'll be worth every dime (and with the cost of ammo, it's really a big investment). 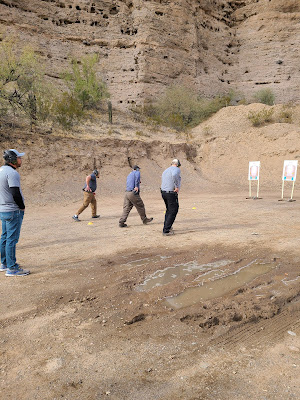 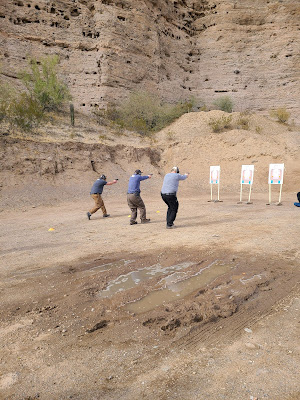 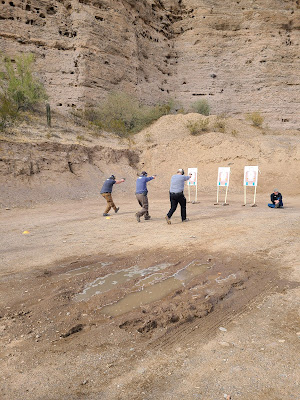 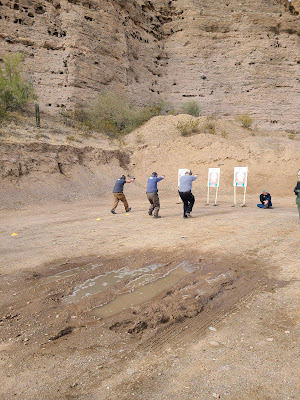 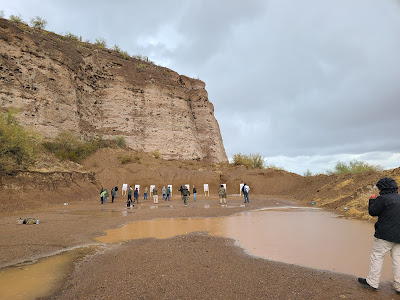 The biggest surprise of the week came on the trip home. As we were headed up through Payson, Arizona we got snowed in!! 22" of heavy wet snow delayed our trip home by three days. 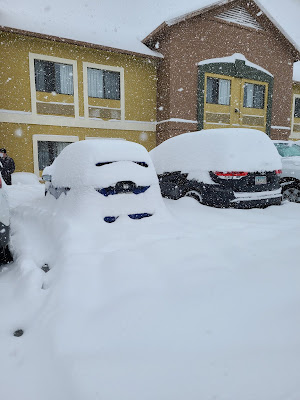 Our three day delay wasn't quite long enough. While I was in Arizona with Mez, Jay was at home suffering from Covid. His symptoms came on after we left for Arizona, and peaked the day I got home. If we'd been delayed just one more day, I would have missed his infectious period and been able to attend the class I had scheduled two weeks later.