I started my kids off pretty young with the shooting thing.  My thought at the time was that if I was going to carry 24/7, then they should be educated about guns and gun safety.  They've never been afraid of guns, because I've never given them any reason to be afraid.  They have a healthy respect for them, but no fear.
I started them with a Browning Buckmark .22 plinking cans.  They loved it.  But I didn't realize until Ashinator went shooting with her Uncle Deejo yesterday that I'd overlooked long guns with her and Monster.  I love long guns.  However, I never carried a long gun, always a pistol, so that's what I wanted them to know.

I had to do some serious un-teaching to get Digger to shoot a shotgun.  His father and his father's friends thought it would be a good idea to hand him a 12 guage shotgun and have him shoot it without any instruction as to how to hold the gun.  I knew that I had to address that issue, so Digger's the only one who's shot a shotgun (and the kid can't miss a clay pigeon).

Deejo changed that yesterday for Ashinator and she had a blast.  Not sure you'll be able to tell how much she had from the photo, though. 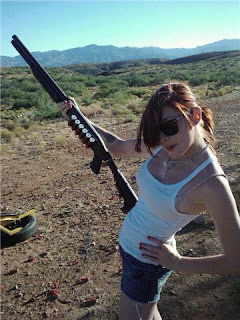 Oh yeah, she obviously didn't read the post on Proper Range Attire.  Lucky for her, it's a pump action shotgun that ejects out the side and not a semi-automatic pistol :)
Posted by GunDiva at 8:45 PM

LOL yep I had the same thought about reading the post on proper range attire...ROFL

At least her booger hook is nowhere near the bang button, so she has learned something.

If she can live with the shotgun with a clear trigger, then we'll let her slide on the attire ... for now ;)

We had so much fun out there. I got to teach the kids about damage range of a 12 gauge. BIG hole up close, itty bitty pellet dings farther away. For a first time with long guns, Ashee was great. I think she really liked plinking longer distance with the .22 rifle. A couple more times out and she'll be a real varmint killer!

I'm awful proud of my little Taylor, too. She hasn't been shooting for over a year now, but she's still got it. It is sooo much fun watching these young ladies grow into modern day Annie Oakleys :)

The pic you put up is great, but ask Ash about her Shotgun Hickey. That girl is TOUGH! Amazing watching her shoot a gun that probably outweighs her by five pounds.

The "Ash" is such a hot little chickie! Bless her heart! Big old gun and itty bitty girl! So cute!