I've been talking about shooting an entire match weak-handed for a couple of months, but hadn't done it yet.  The last month I planned on shooting weak-handed, the person I was going to borrow the holster from couldn't find one and I ended up shooting it strong-handed (I'm a righty).  Then I was at HCR for the following month.  This time, instead of planning on borrowing a left-handed holster, I just bought one.  I've practiced with it exactly twice.  Did I have a whole month to practice?  Yep.  Did I?  Just twice.  Have I mentioned I'm a procrastinator?

Nevertheless, this morning, I loaded up with my left-handed holster and left my right-handed ones at home.  That way I couldn't chicken out at the last second and procrastinate again.

Stage 1
Starting position: seated in pickup, handgun loaded and holstered,hands on steering wheel, seatbelt on.
Course of fire: remove seatbelt, engage P1 & P2 from inside the pickup; engage T1 - T3 from across the truck bed and P3, P4 and T4 from the back bumper. 8 total targets. 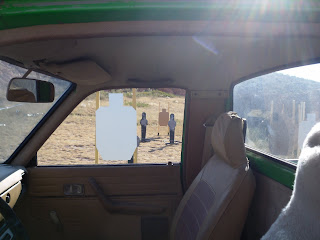 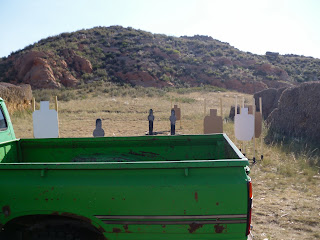 Here's the video.  Just a note, the gun wasn't malfunctioning - I was.  Every time it didn't go into battery was because I was limp-wristing it.  Totally my fault.  It only happened once or twice (or three or four times).  Each flipping stage.


Stage 2
Starting position: loaded, holstered handgun, standing in the shooting box, hands at side.
Course of fire: engage targets from either side in tactical order: right side standing behind cover; left side behind cover, shooting under the "wall".  8 total targets. 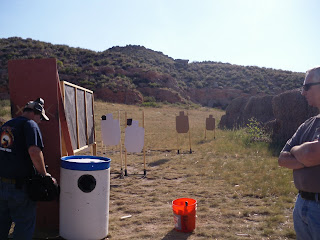 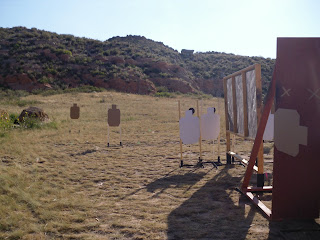 Here's the video.  I'm pretty happy that I was able to hit the steel plates that were hidden behind the good guys without hitting the good guys.

Stage 3
Starting position: shooter in box A, handgun loaded and holstered, arms at side.
Course of fire: shooter steps into box b (pink outlined area), engages T1 - T11 in any order; do not shoot the good (white) guys.  11 total targets. 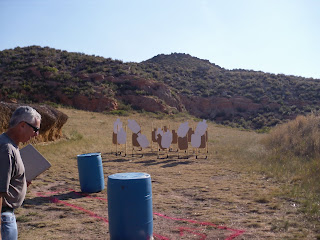 This stage scared the bejeezus out of me!  Do you see how many good guys there are?  Nine good guys, eleven bad guys.  Yikes. 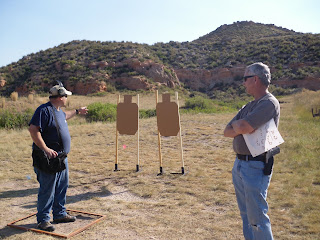 This one looks (and felt backward) because my "strong" arm today is actually my weak arm in real life.

Stage 5
Starting position: shooter behind door, strong hand on door knob, handgun loaded and holstered.
Course of fire: open door with strong hand only, draw and engage visible targets in any order; targets hidden behind the "walls" must be shot in tactical order (slicing the pie). 11 total targets. 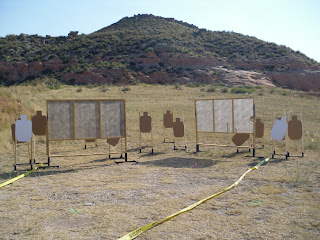 Yep, the limp wrist strikes again.  I like the beginning of this run, but I can't seem to get the rhythm after the magazine change.


Side match: Rifle
Starting position: shooter behind the door, rifle loaded, muzzle in a safe position.
Course of fire: open door with strong hand only, draw and engage visible targets in any order; targets hidden behind the "walls" must be shot in tactical order (slicing the pie). 14 total targets. 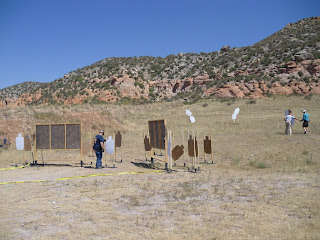 This is a long video - I was going to edit it down, but I had too much fun shooting the stage to want to cut any of it out.  Besides, I want everyone to see the beautiful head shot I had from the doorway and Mez video'd the scoring.  I kinda forgot one target, though.

Working out with El Poquito Diablo really helped when I was having trouble with the rifle; I had the extra oompf I needed to manhandle the 9.25# rifle.  After the stage, one of the other shooters told me that I was having problems because I was hitting my left forearm with the charging handle.  I didn't feel it, but you can see where I had the charging handle flush against my left wrist.