One of the biggest changes to come about for me in 2012 is the closing of "my" gun shop, Colorado Gun Works.  Despite knowing that Boss Man *hates* Colorado and despite me telling him for years, "if you hate it so much, leave", now that he's actually doing it, I'm sad.

Boss Man is keeping the business open, "just relocating" to Southern Indiana.  But I'm not relocating and my local store is closing, so what will I do on Fridays?  Where will I go to hang out and get my gun/girl time with Tara?

There's a lot of whining I could do about missing my shop, but instead I thought I'd look at the positive side and share with everyone how the shop has impacted my life and helped me grow as a shooter.  If you've read my profile (the tabs at the top of the page hold profiles for all of us contributers), you know that an old boyfriend of mine started me shooting.  But it was more of a "how cute, my girlfriend can shoot" kind of thing with him.

Never once, not ever, did I get that kind of vibe from the boys at the shop.  From the first time I walked in to look over their inventory, I was welcomed.  Not only was Boss Man welcoming, he was willing to spend time talking to me.  The shop was unlike anything I'd ever experienced; it had more of a coffee shop atmosphere.  Come in, grab a stool at the counter, and talk about anything you'd like - religion and politics included.  I spend a few months in and out of the shop, just talking, before I received my Glock 23 as a birthday present from my family.  After that, I literally spent hours a couple of evenings a week hanging out at the shop.

Boss Man encouraged me to take a concealed carry course from The Original Bad Boy, a man who has truly "been there, done that".  The Original Bad Boy is the only person I've seen disappear in a room full of people.  If you've never met anyone with that ability, it's down right spooky.  He just goes so still and draws no attention to himself.  Next thing you know, he's gone.  His favorite place to disappear was the couch by the coffee pot.

The money I spent on the class with The Original Bad Boy was worth every damn cent.  I could have taken two other classes for the price of one of his, but I learned so much in the eight hours at the range with him that I would never have learned otherwise.  We started with the basics - this is a gun, this is where the projectiles exit - and ended shooting on the move, from cover and concealment, learning how to think tactically.

About the time I'd taken the CCW class, I'd started shooting at the Defensive Pistol matches and spending even more time at the shop.  When I started shooting Defensive Pistol, I was the only female shooter in a field of between twelve and fifteen shooters.  Now, when I go, there are about ten female shooters out of a field of between thirty to forty shooters.  It's a huge growth of women shooters. 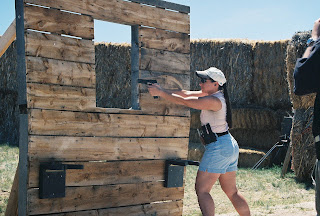 Defensive pistol introduced me to even more people who would influence my shooting.  Notably, Bud Bond, who was one of the fastest revolver shooters in the world. Think Jerry Miculek fast.  Think fast enough that he actually beat Jerry in 2001.  Bud took me under his wing, as he did many shooters, and I learned a ton from him.  Imagine my happiness when I beat him in a head-to-head challenge at one of the Defensive Pistol matches.  Of course, I was shooting my Glock and he was shooting his revolver.  He fumbled a re-load - which rarely happened - but it gave me the edge.  I never beat him again, but I thank the Shooting God for letting me feel that joy.  And the confidence it gave me was unparallelled.

When Boss Man had an opening, he hired me for weekend work.  I drew exactly *ONE* paycheck from the shop and it was for something like $38, before I learned the joy of a "shop account".  I worked for Boss Man for almost two years and in that time I got to learn and do some amazing things.

I learned to build an 870 from the receiver up as my birthday present to myself in 2005. She was called, alternatively, my "12 guage flashlight" or my "flash 'n trash" shotgun.  Tara calls it the "Skeeter Special" in her Steele Street series.


I loved my shotgun so much, I built one for my brother Deejo for Christmas, too.  His shotgun, similar to mine, but lacking the SureFire foreend, made an appearance as Red Dog's shotgun in one of Tara's books.
The guys at the shop became "my boys": Matt, Robbie, Mez, Z, Brad.  They took me under their wing and helped my shooting grow exponentially.  Even though I was a newer shooter, they never took the "how cute, she shoots" approach with me.  They all treated me with respect and as an equal, which helped to increase my confidence.

Our marathon shooting days were stuff legends were made of.  In the picture above, you'll see eight cases of clays.  We shot them all.  That day.  And that was only the second half of the day; we'd started with pistols.  An average shooting day for us lasted anywhere between 6-8 hours and literally included thousands of rounds each.  God, I loved my store account.

Not only did the shop introduce me to my boys, I also met Tara through the shop.  The Original Bad Boy asked me to co-teach one of his pistol classes, and the rest, as they say is history.  Tara and I hit it off and we started shooting here and there together.  As we shot more frequently, our friendship grew.  We took a trip to Elk Mountain on the Western Slope of Colorado and took a day's worth of private classes from Valhalla.  We've also competed together, using her Remington 700 .308, at 1,000 yard matches.  From never shooting a gun to competing in long-range matches in just a few years, Tara's shooting skills have exploded.

Together, Tara and I have introduced several women to shooting.  The most memorable was an 80+ year old woman who wanted to learn to shoot.  She was a spitfire; the little .22 rifle we had her shooting was almost as big as she was.  I've not had a comparable experience since; she was so thrilled to be shooting that it was contagious.

In fact, our dream is to be able to do more to promote shooting among women.  There are not nearly enough women-friendly places where one can feel immediately comfortable and be treated as an equal.  Women shooters are being recognized as legitimate shooters, thanks to women like Julie Goloski Golob, one of my shooting heros, who are making the world take notice.  But there's still a disconnect between retailers/instructors and women shooters.

I'm not man bashing here, but men are not women.  Unless a woman stumbles into a situation like Tara and I did, it's difficult for women to be taken seriously as shooters.

Working at the shop not only introduced me to new people and skills, but allowed me the opportunity to shoot guns I'd never otherwise be able to shoot.  I have the confidence to try new things because of the shop.  Where else would I have gotten to shoot an actual elephant gun, a .458 Lott, or a .50 beowulf, or a .454 casull?

I was unbelievably lucky when I first walked into Colorado Gun Works.  That store, and the people in it, the experiences I had, literally changed and shaped my life for the better. Not only am I going to miss you, Boss Man, but I'm going to miss the shop.  There's a big ole hole in my heart right now.
Posted by GunDiva at 1:35 PM

At least you have been fortunate enough to have found a "home" gun shop. I have yet to find one around here that felt like home. Most of them have an attitude.

Shepherd K - ain't that the truth. I don't know that there's another shop around that will be able to fill the hole left behind by CGW moving.

Your gun shop is pretty awesome. You offer a wide range of guns. Thanks for sharing the pictures by the way.