After a really gawdawful day at work in February, I found Zombie Industries online and did a little retail therapy.  I ordered a bleeding zombie target, the zombie shooting gallery, and some Zomboom!.

I ordered the Rocky Zombie, but got a phone call the next day from Zombie Industries' customer service.  Seems they were out of Rocky, so they offered a different zombie.  I didn't really have my heart set on just one zombie, so I agreed to the change and in less than a week a box bearing the following warning showed up on my doorstep.

The "Outbreak 'Face Off' Shooting Gallery" and the Zomboom! arrived the same day the bleeding zombie did, and they all arrived earlier than the estimated delivery date.  Two thumbs up for their customer service and shipping department.

Unfortunately, I didn't have time to take the zombie out shooting until the end of March.  After I finished customizing Junior's shotgun (I still have a headache from that cluster!), we decided to go out the next day to kill some zombies.  The range was a disaster when we got there, but after a few minutes of clean-up I stopped twitching and cursing enough to unpack the zombie. 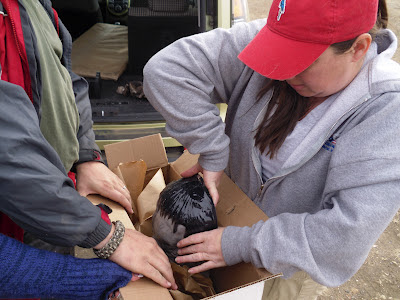 After we'd staked down the zombie via 1x2 wooden enema, we pulled out the shooting gallery and got it ready to shoot.  Set up was unbelievably easy and quick.  The most time consuming part was loading all of the clays into the holes.  We were lucky in that it wasn't a windy day.  As a general rule, the plains are exceptionally windy and this set-up would not have worked if we would have had wind.
We started the day with the shooting gallery, which is a whole lot harder than it looks.  We were shooting from about 15 yards, not too far, but it still took some doing to shoot out all of their brains.  I love the shooting gallery and I especially love that it's re-usable (as long as you or your friends don't miss too often).  But I do have one complaint: the eight edge targets - four on the right and four on the left - are right in front of the poles that support it.  I ended up having to throw my poles away at the end of the day because they were unusable from people shooting through the clays and hitting the poles.  I don't know that there's a solution other than not loading up those eight zombie brains.  I kept the cardboard cut-out and I figure I'll buy some dowel rods and plan on throwing them away after each shooting day.  Other than that one complaint, this was definitely worth the $30 or so I spent on it.

We were all chomping at the bit to get to the bleeding zombie, so after warming up at the shooting gallery we moved on to our captive zombie.  That wooden enema actually worked pretty well to keep him in one place (well, that and the fact that he had no legs).

I was surprised when I unpacked him at how lightweight he was and I wondered how on earth he could possibly be a bleeder when he weighed so little.  I also noticed that Zombie Industries was kind enough to provide us with a couple of spaces for Zomboom! - one in the zombie's head and one in his chest.  Because we've been under fire weather warnings, I chose to leave the Zomboom! at home and not risk starting a prairie fire.  I'm thinking that the Zomboom! will be fun to have next winter in the snow.

We had a plan in mind for shooting the bleeder.  We started with the smallest caliber we had (.22) and worked our way up.  Being as how I bought the bleeder, I pulled rank and got to go first with my new GSG (which, BTW, I *love*).  I know the rule for shooting zombies is "two to the head kills 'em dead" and I was shooting a .22, so all shots were headshots.  It was hard to see him bleed through those little holes, but when I put enough holes in him, he started oozing pink.  Did you know zombies bleed pink?  Yeah, me either.

M pulled out her new XDM 9mm and went next while I loaded up RCC's new PX4 Storm with 9mm Golden Sabers.  The nines made slightly bigger holes and we moved onto chest shots just for the bleeding factor.  There wasn't much tissue damage difference between the round-nose 9mm and the Golden Sabers.  I think that's because there really wasn't much "tissue" to 'activate' the Golden Sabers - they passed right on through.

Junior had his Taurus .45 loaded and ready after I gave the PX4 Storm a go.  The .45s really started showing the destruction.  I almost felt sorry for the zombie.  Almost.  I mean, really, chest shots weren't going to kill him and he was being kept upright by a 1x2 stick in his arse.  Good thing I unloaded twenty or so .22 rounds into his nogger to put him out of his misery first. After we'd worked our way up from .22 to .45, we went back and started all over again.  I let The Girl, Deejo's daughter, unload a magazine or two from the GSG into the zombie and we all switched around guns for fun.  Honestly, we probably could have put another couple of hundred rounds through the zombie, but seeing the destruction just whetted our appetite for more zombie destruction, so we pulled out the shotguns.  Yeah, baby.  Though I had slugs, I chose not to use them on the zombie, seeing as how there wasn't much of him left and I wasn't sure how far the slug would fly after passing through a tissue-less zombie.

I used RCC's shotgun, which has the GoPro mount on it and had set up the Flip camera earlier to record the destruction.  We loaded up the shotguns and took our turns throwing #7.5 birdshot into the carcass.  Was a blast!

I wish I'd set the Flip up closer than the firing line, I think we would have had much better footage.  Next time, I'll take the tripod out and arrange the camera so that we can see every round (even the .22s) hit.

Two thumbs up for the bleeding zombie targets - I'll definitely be buying more in the near future.  Easy to set up, fun to shoot, and they're biodegradable, so clean up is a breeze!
Posted by GunDiva at 11:00 PM