I am not a gunsmith nor do I claim to be one.  There's a whole heap about guns that I don't know and I've always taken mine to a gunsmith if anything ever needed to be done mechanically.  Cosmetically, though, I've been known to play around, mostly with easy-to-do additions that look impressive but are actually very easy.  I "built" a shotgun from the receiver up several years ago, but I left the important things, like trigger work to Boss Man.

I had so much fun, I built Deejo a shotgun.

Last Christmas, I modified my Remington 870

And over New Year's helped RCC modify his Remington 870.

Essentially, everything I've done to an 870 has been plug-n-play.  When Junior, my other brother, asked me to build his shotgun a few years ago, I said sure.  For some reason, though, he had to buck the trend and buy a Mossberg 500 instead of a Remington 870.  I bought the buttstock he wanted and then his build stalled out, meaning we were both too broke to buy the shotgun.  For going on five years, he's held on to the buttstock I bought him hoping for 'someday' to come along.  M, my future SIL, gave him 'someday' for his birthday this year and bought him his Mossberg.  He has spend the last month finding and ordering the accessories he wanted.  Finally, last week they all came in, which meant that I was on the hook for putting together his gun.

No problem, I thought.  I'd always been told that the Mossbergs were as easy to customize as the Remingtons - how difficult could it be?  He only wanted a couple of things added: a heat shield, a tac rail, a side saddle,and his buttstock.  I insisted on the mercury recoil system and he willingly agreed. 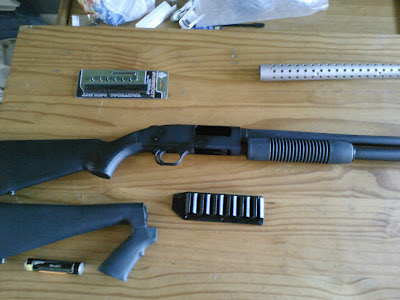 I guessed it would take about forty-five minutes to do the whole thing.  Two screws to take off the butt plate, one screw holding the stock to the receiver, a couple of screws for the tac rail and the side saddle, pull the barrel off to slide the heat shield on.  Seriously, forty-five minutes to put it together.  The mercury recoil system wouldn't take long to install, but it would take eight hours for the acrylic to cure.

Holy Mother of God was I wrong!  My projected forty-five minutes (and I thought I was way overestimating my time) turned into five hours.

So not kidding.  I wish I was.

About the only thing that went right was taking the two screws out of the butt plate.  Yep, that went well.  And then the entire thing went to shit.  The bolt, screw, whatevertheeffitis, that holds the buttstock to the receiver cross-threaded and we spent an hour trying to back it out.
The screw was destroyed and the threads were stripped out.  Junior made a run to the hardware store and got some new screws.  We managed to find one that worked only to realize that the adapter that came with the stock was too short.  Luckily, the stock also came with adapters for a Remington.  The Remington adapter was too long and the Mossberg one was too short.  No problem.  Junior cut the Remington one down to the correct length and after a very long afternoon we were able to attach the stock to the receiver.  Hallelujah!

The side saddle went on without a hitch.  A miracle!

The tac rail went on without a hitch.  Two for two!

The heat shield.  Mother Effer.  I knew it was too good to be true.

I got it on, but couldn't get the front end to clamp down enough to thread the screws, so I handed it over to Junior.  He couldn't get it to work either.  Thank God RCC was available, because after about forty-five minutes of creative swearing and doing everything I could think of, I was ready to throw the whole gun out the window.  RCC managed to work some magic with a C clamp, a pair of pliers and an allen wrench.  Whew!  Heat shield - done.

I had Junior secure the shotgun vertically so I could pour acrylic into the stock to suspend the mercury recoil system.  At the shop we had these wonderful bench vices that we could adjust to make sure that everything was level - I tell you, I really missed those vices a lot while putting this gun together.  I mixed the acrylic and Junior figured out a way to support the shotgun that would keep it secure over night while the acrylic cured.
In order to suspend the recoil system in the acrylic, Junior found an old metal plate that he could put a screw through and attached the recoil system.  We let it sit over night to cure.  In the morning, all he had to do was remove the screw and re-attach the butt plate.

I have to admit, it is a pretty gun...
Too bad the damn thing doesn't go bang.

Okay, okay.  It goes bang.  Once.  If you directly load the chamber.

I panicked a little bit, thinking I'd done something to completely screw up my brother's gun.  But we didn't do a darn thing that would have impacted its ability to cycle.  Come to find out, he'd been having trouble with it cycling ever since he bought it.  Boss Man is now in Indiana, I can't just run it by the shop and have him look at it.  However, one of "my boys", Stein, apprenticed under Boss Man for several years so I called him.  Thankfully, Stein speaks GunDiva so when I was explaining about the thingy on the inside of the receiver that releases the round from the magazine so the other thingy can pick it up and load it into the chamber, he knew what I was talking about.  And better yet, he can fix it.

You know what I learned from this experience?

Well, I am sorry you all had such a tough go at it, but man that was good read:

LOL. That was very entertaining even tho it sounded painful. I would have been sweating with frustration and thrown the gun through the sheetrock. Remington 870s are the bestest. I love them! I have a Mossberg also that is outfitted with a short stock and it is a tactical gun. I took mine to a gunsmith to have it modified. It's still there. 1 year later. Oy.

Momma, the gunsmith has probably thrown it through the sheetrock just like you would have done. POS.