It's been awhile since I've last posted.   The battle with the state government over their latest foray into gun control, and the myriad of proposed laws coming from the Feds has left me tired.     All the talk of restrictions on law abiding citizens has lead to a rush on gun purchases and training.   Where I normally teach 1 class a month, February had 3 classes, and March 4, April has 3 on the calendar and May might have as many as 4.   It's a good problem to have, please don't take this to mean I'm complaining I'm not, and this is not the reason for this post, but moreover an explanation for my absence.


I wrote a month or two ago about my daughter wanting to get into the shooting sports and I followed up with our first match on Face Book.   We have continued to train and I thought I'd post a few update notes.   We're going to give Steel Challenge a try in April, so we're back at the range on a regular basis.

Firearm reliability, or more accurately ammunition reliability for a 22 semi auto pistol.   I've been surprised at how many misfires and failure to feeds we've experienced.   We've tried the Gray box Winchester, Remington, American Eagle and some Federal of a different color as well.   The only manufacturer that gave us 100% reliability was CCI.   The others are fine to train with, because it gives us a chance to practice our outage drills, but some days you'd just as soon not have the issues.   OK picked up 300 rounds of CCI for matches (no I can't get you any 22 - sorry).

Practice specific skills.  We learned holster work in the basement with snap caps.  Loading magazines, holster, draw, site alignment/picture on target taped to the wall and squeeze.   Repeat for 15 minutes.  I think you can do more with dry fire practice than most people realize.  Slow is smooth, smooth is fast - speed comes with familiarity.
We also work on target transitions.   It's difficult to do indoors, but if we staple multiple circles on to the target we can do up and down transitions.   Shoot the high circle, shoot the low circle.   Draw shoot 2 to the low circle, then shoot 1 to the top circle.  My shooter has proven to not be too young for one handed and weak handed shooting in small doses.

Next drill will be the numbered circles in array - call out the number to them, have them shoot the number.

Dedicated time.   Like soccer or track practice, we dedicate a time to go to the range once a week.   I'm not such a hard ass that if she has alternate plans we can't drop it.  I'm taking advice I got from Julie Golob - "try to keep this fun and easy".  So we do.   I'm finding that she has started looking forward to going to the range.

Variety.  Allow your kiddo to warm up at their own pace, no time limit.   We shot at targets close up and out to about 25 feet with the pistol and 40 feet with the rifle.    I noticed that my kiddo was wanting to get the perfect shot regardless of how far away the target was.   I'm a believer in aimed shots, but as a very experienced shooter sight alignment comes very quickly to me.  I taught her point shooting at close targets and using flash sight picture for targets out to 10 feet, aimed shots beyond that.  We'll expand and continue to practice those skills.  But your kids can pick up some pretty advanced skills pretty rapidly, so don't be reluctant to push them.

Keep it Fun.  When shooting becomes too much like chores expect their interest to fall off.   Be flexible with your schedule, but do try to come up with a set time.   What I'm trying to say is if you have a range day on the calendar but it conflicts with a school dance or a friends birthday - let them go to their event, remember they're still kids.

Yesterday we also worked in using a S&W MP15-22.   Earlier in the week we had worked in how to load, unload, reload, safety, sight alignment and stance into our dry fire practice.   This rifle is lighter than your average AR, identical controls,even breaks down for cleaning the same way, and let's face it - it's damn cool.  She worked the trigger reset like a pro, we didn't even discuss trigger reset with the rifle, but she brought that over on her own from the pistol.   We shot at a target at about 40 feet with the rifle.   Since we could not identify hits on the target, she had to focus on the front sight and trust that the gun did what she told it to do.    When we brought the target in for inspection she was very pleased to learn that she was pretty accurate on the target. 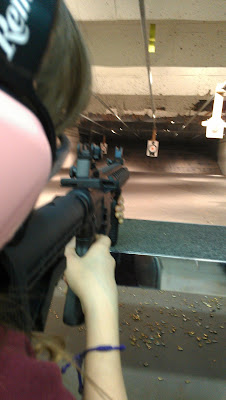 Side notes, This rifle eats all ammunition equally and does not have the problem that the pistol has.  No misfires, however the jury is still out on the Plinker Tactical 35 round magazine.   No problems with feeding or reliability out of the S&W mags, but the Plinker has exhibited feeding issues when the magazine nears empty - last 4 rounds.   The S&W 10 round mags can be modified to the 25 round capacity by removing the base plate, spring and follower, and using a hammer and long screw driver to pound out the pin stop that the 10 rounder uses.  No hit on reliability.

Reward.  Taking your kids to the range is very rewarding - it usually makes my week, and yesterday was no exception.   Somethings that I've learned - make the time about them, do your shooting at another time.  Coach them using the their impacts, but don't correct for every shot.   Tell them where they impact so they can focus on the site, if the target can be seen - tell them "good hit".   If they are having a bad day, tell them you have bad days too, it's just how it is some days.  Take pictures of their successes, it tells them it's important to you too.


Yesterday, I notice the 20 something guys in the next lane, and the 40 something guy on the other side, realize that this 11 year old girl had better form, better control, and shot more accurately with her 22 than they did with their guns.   It was pretty fun to watch the reactions as both a father and an instructor.   I'm sure you've all taken your kids to the range, but consider a Basic Class if you haven't, or consider the NRA Basic book and go over it with your kiddo.   This is a time in their lives in which learning is a key part, they can absorb and learn when primed and enthusiastic to do so.   They see how much you enjoy shooting and they want to be a part of that, capitalize on the opportunity.

It's always amazing that federal/state legislation ends up affecting the law-abiding gun owners.

It is just so stupidly nonsensical at times...

Neat to read how she is progressing and how much fun you both are having!!!