My Para's almost nine years old (she was "born" on my birthday according to her paperwork) and she's been well-used.  So well-used that she was beginning to look a bit rode hard and put away wet.  Before Christmas, I won a $50 gift certificate from 13 Zulu so I thought I'd give my faithful 1911 a bit of a facelift.

The problem was that I had no idea what I wanted to do with her.  13 Zulu has done some amazing DuraCoat jobs, including a Zombie Hunter theme for my brother Junior's gun.  I spent a lot of time looking through their photo galleries, both on their website and Facebook page, but couldn't come up with an idea.

I kind of had maybe an idea, but was open to suggestion.  I dragged Jay along with me to drop off the Para and to help me come up with some ideas.  My problem is that I'm not super passionate about anything in particular.  Junior loves zombies, so he had blood splatter and a zombie put on his gun.  Mrs. Junior fell in love with a "tribal" design and had one put on her gun.  But I have a 1911, I wasn't going to put a 1911 on my gun, that would just be silly.  A great deal of the guns 13 Zulu has DuraCoated for women were coming out of the shop pink, but I'm not a pink kind of girl.  That was the one thing I was certain of - absolutely no pink anywhere on my gun.  I was going to go with matte black and threw out the idea of putting "GunDiva" on it somewhere.

Mike was incredibly patient with me and gently guided me away from the plain old black. (I think it offended him to do something so boring.)  He kept offering up ideas, but I was luke-warm about most of them until he told me he could make it look like stone.  Oooo, my ears perked up.  Finally!  We had a starting point.  The more he and Jay talked, the more excited I got about her facelift.  I left the shop so excited I could hardly stand myself.

Mike was great about sending me updates, starting within an hour of leaving her in his care.


In order to put "GunDiva" on the slide, he had to get rid of the maker's stamps on each side.  I didn't even know that was possible, but he did a great job of filling them.  You can't even tell they used to exist.


Before I knew it, I was getting pictures from Mike of my completed gun.  Which I then showed to everybody at work.  I carried my phone around and if anyone made eye contact with me, they got stuck seeing pictures of my baby, even if they weren't gunnies. 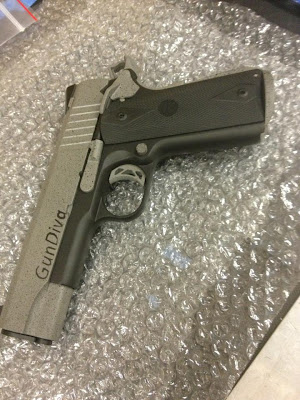 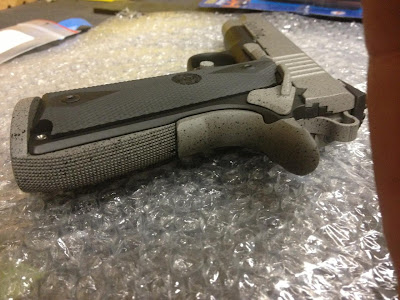 I can't believe it's the same gun.  She feels the same.  When I pick her up, it's like she's home, but I can't get over the transformation in her looks.  There's a Defensive Pistol match coming up on Sunday and I can't wait to show her off.  Mike recommends not putting her in a holster for about four weeks, and I love the job he did, so I'll be following his recommendation and shooting her from low-ready - all the better to show her off to everyone at the range. :)

I already have plans to have him do a matching job on my shotgun once I get it finished; I think the matched set will look extra bad ass.

I highly recommend 13 Zulu to anyone who is interested in having their gun DuraCoated.  Mike was unbelievably patient and helped me come up with a design I not only could live with, but love.  The turn-around time was a matter of days; in fact, she sat in the shop longer after she was done while waiting on me than it took Mike to finish her up. 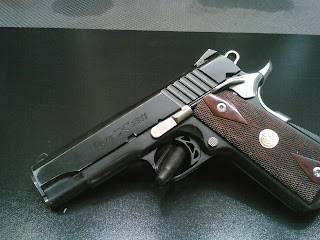 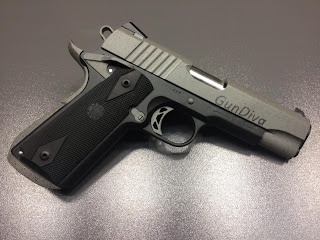 And it looks hot! Do you think he could do that with my face?

But he did say he'd put "Fargo" on your favorite piece for you.

Oh my goodness that looks awesome!! I never even think to do anything with my guns like that.

I wonder if this would work for M's gun. She wanted a sparkling backstrap, but on the .22 the backstrap does not come off...

Pretty, it came out really nice!