The Weapons of Romance

Don't panic. Despite the ominous title, we will be talking, literally, about weapons in romance novels - a personal journey.

I started out writing for Bantam Books under my own name, Glenna McReynolds, and ended up writing 13 books for their "Loveswept" line of romance novels - and yes, that's Fabio on the cover. 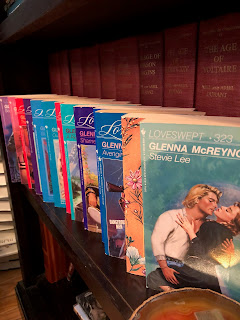 Out of those 13 books, only one had a firearm in it, a shotgun. And not a lot happened with the shotgun.  Our hero would pull the trigger and it would go bang. Mostly, he threatened people with it. That's about all the info I had at my disposal. So here's proof positive that even with zero knowledge of actual firearms, our culture had at least imbued me with enough "gun sense" to give this bad boy a shotgun. 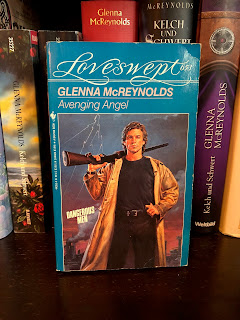 From there I branched out into an epic medieval fantasy trilogy, with plenty of romance thrown in.  The books were absolutely jam-packed with battles and weapons, all of the medieval variety - knives and swords and bows and arrows - all of which can be researched in the secure privacy of your own office with just you and a hundred or so books (Make that 180 books, to be exact.  Yes, I counted them.  They were my best friends for 6 years. ) 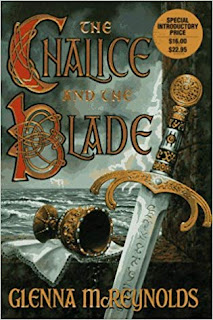 But after six years of "living" in medieval Wales (with all those books), I was ready for a break from the lyrically complex language, devilishly complex plotting, and the sheer weight of what is termed as "epic high-fantasy."  Which is how I stumbled into...

I wanted to have some fun.  And what could be more fun than a "Breathtaking...phenomenal adventure!" on the Amazon River?  Truly, not much, but... 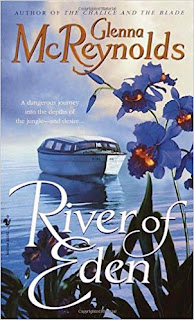 The great adventure includes a woman going up the river with a boatload of  guns.  She's ready to start a war to get what she's after - and to help her achieve her goal, I gave her a whopping 1000 rounds of ammo, the most ammo I could imagine anyone ever needing.  Ever.  For anything.  A thousand rounds.  To go up against a rogue army of gold miners and soldiers working on the wrong side of the law in the heart of the Amazon.

Amazingly, not one single reader ever called me out on that pitiful number of cartridges.  It took quite a few years before I even knew that I'd made a mistake, let alone such a huge mistake.  And yes, I was standing in a gun shop when that epiphany hit me like a ton of...uh...ammo?  Fortunately, no one in the shop had read River of Eden.  Thank goodness they were reading my STEELE STREET books.  Neither my agent, my editor, or my publisher ever had a clue about my big mistake. Ahh, New York.

Note: the name change to Tara Janzen came about because a lot of  folks who read The Chalice and the Blade trilogy thought Glenna McReynolds was an actual Druid priestess, which I loved, but which confused them when River of Eden was published.  So for these much more hard-edged, fast-paced stories about Fast Cars, Hot Women, Big Guns, and Bad Boys, my publisher suggested a pseudonym.  I agreed.  And for you puzzle solvers out there, Tara Janzen is an anagram - Good Luck! 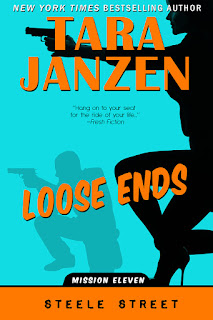 I love action movies, and after River of Eden, I wanted to write romance novels that raced along like action movies, but I didn't know anything about guns, and what's an action movie without a lot of guns?  I didn't want to be the one to answer that question.  I wanted full-on action, and that meant real firepower.  And unlike researching medieval fantasy weapons, to learn about guns, I knew I would have to "get out there in the real world, and actually TALK to people."  Why?  Because there's so much info about guns in books and online, much of it in the lovely slang of devoted acolytes, but without enough explanation to make it usable on the page.. I needed to start at square one.  Thankfully, I found it. 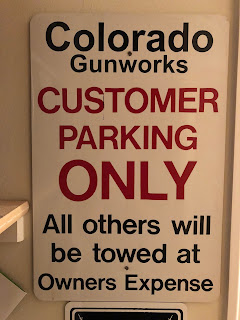 I pulled up in front of this sign and walked into a whole new world.  I had already written the first two Steele Street Books,  about an elite group of black ops soldiers, and had realized there had to be something someone with a pistol did besides "draw" and "pull the trigger."  But what in the world could it possibly be? Sounds ridiculous now, but that truly is all I had to work with.

When I got inside Colorado Gunworks, shockingly, the first person I talked with, the guy behind the counter, had read THE CHALICE AND THE BLADE, the whole fantasy trilogy, all 500,000 words, and so had his wife!   Then the owner came out and my journey into the gun world began. 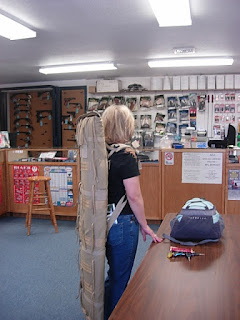 Within a half an hour, another gunfighter walked in.  A few days later, I met my first shooting partner, the Gun Diva.

All of these people have been incredibly generous and welcoming - something I find they have in common with a lot of shooters.  The camaraderie, friendships, and an unending education about firearms, and education and training through many classes and an untold number of hours and days spent hanging around gun shops and gun ranges over the last thirteen years has enabled me to write rocket-fueled romantic suspense novels absolutely chock full of great guns with men and women who know how to use them. 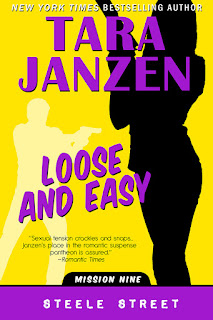 Not every girl has a lot of gear.  I now have gear, range bags full of it, shelves full of ammo, a reloading bench and all the equipment that goes on it.  And I have firearms, my firearms, having long moved on from the point where some guy is picking out my guns (the subject of my next GunDiva blog post).  And the books I'm writing are better because of it. 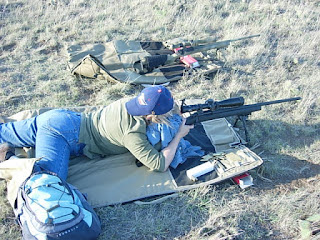 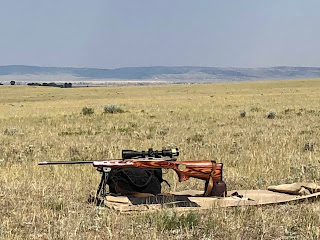 The key to my transformation from someone who had never even seen a handgun except on TV or in the movies, to someone who now owns 6 handguns and 3 incredibly fabulous rifles (truly fabulous),  was walking into that first gun shop.  But not any old gun shop will do. I got lucky that day. We have a lot of gun shops in town, and I've been in all of them many times, and I know if I'd walked into any one of  them other than Colorado Gunworks, I would have walked out with nothing more than a couple of  poorly advised suggestions for what gun I should buy, and no reason to ever go back.  Let me repeat that - NO REASON TO EVER GO BACK.  There would have been no welcome, no generosity, no one seeing me as potentially a great and happy shooter, because I couldn't "talk the talk." I would have been dismissed.  With that in mind, I'd like to recommend an article in the October/November 2018 NSSF SHOT BUSINESS magazine, page 38 "The Right Way" - an article about selling guns to women.  I especially recommend it if you own a gun shop or work in a gun shop. Coming across this article just a month after the Gun Diva filled 3 sections of a women's only Guns099 class  makes me feel like the tide has turned,  especially since not a single gun in the whole darn article was frickin' PINK!

If you're not a gun shop owner and don't work in a gun shop, sure, go read the article, then, for a good time and some great guns, go read a STEELE STREET book. 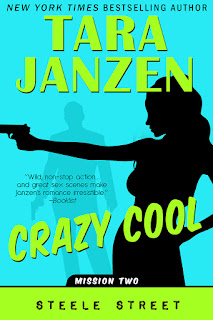 Best guns and toughest girls in the series are in: 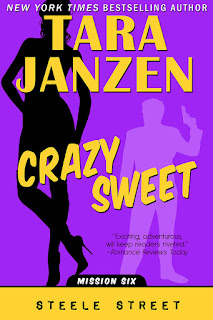 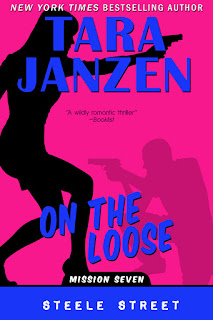 Took me a while to get over being star-struck, but I'm glad I got over it, because everyone needs an amazing friend like Glenna in their life.

I miss my friends in Colorado, but especially you Glenna.
We had so much more than just a Customer/Gunshop Guy relationship. As the years go by I will always recall with warmth and love the times we spent working through scenarios with you, and the times building toys and sending rounds down range.
Thank you for mentioning the old Colorado Gun Works. The new place in Indiana has a ways to go before it is as much a home as CGW was, but maybe someday our friends will visit.
The new place is being rebranded as American Arsenal & Armory as of 2019.
Hope to see you again soon.
C.

Hey GunDiva (where's a little hug emoji when you need it!) What everybody needs is a wonderful friend like you. We have had some fun, girl, and put a lot of rounds downrange. Of course, you're using both hands, shooting right-handed, and then shooting left-handed with equal ease. Amazing. Sooo glad I turned out to be "that" Glenna McReynolds :-)

Daddy Hawk, you nailed it. Tarzan Jane. I wanted a name that made me smile!

Helloooo C! All those "toys" we built (you built, while I watched :-) are still fabulous and still sending rounds down range. I ran into someone from the romance writers conference you and Tel did with Cindy and I, and they still remember you and Tel doing all that "knife work" for the education of the romance writers wanting to get more weapons into their work, and they remembered all the firearms you brought. American Arsenal & Armory is a great name. Good luck! And might get to the SHOW again, so see you there!