A couple of weeks ago, I received an email from Dragon Leatherworks saying that Brigid from Home on the Range had suggested I'd be willing to do a review on a holster for a 1911.  Since I just happen to have a 1911 and, like most shooters, I'm always looking for the perfect holster I jumped at the chance.

Within a week, I received the holster.  One of my favorite holsters is the Galco Side Snap Scabbard, because it's nice to be able to just snap a holster on over a belt instead of having to get undressed to put on or take off my holster.  When I opened the package and saw the holster that Dragon had sent me, I was excited to see that it also had snaps. (Which I didn't think to take a picture of, of course.) 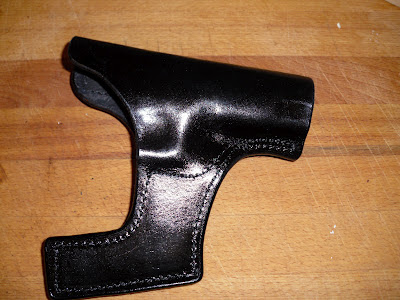 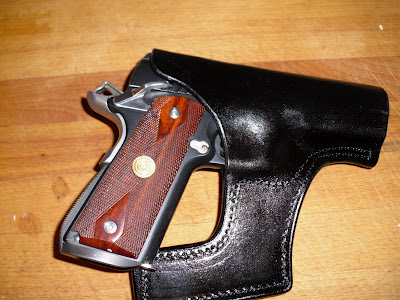 I was intrigued by the cut-out, but before I had a chance to ask about it, I got an email from Dragon explaining the evolution of this holster.


I had a request to modify an existing design called the DL Classic that I sell, so as to fit the following:

There really wasn't any way to modify the original design, so I used it as a basis for how the holster should *look*, then went to work getting the function to follow form. The end result is what you received last week. The holster was a complete re-thinking of an existing design.


I would say that he met his goals with this modification of his original holster.  In order to test it out, I came up with a game plan by which I will test all holsters.  I'm not allowed to carry at work, so I decided I'd carry it on a "usual" day off and again at the range.

My "usual" day off consists of driving to my parents' place, taking Estes out for a ride, doing some horse chores, and doing laundry.  Fairly typical stuff.

For my range day, I decided I'd do essentially FitShot lite.  The beauty of FitShot is that it requires a lot of movement and requires that the holster keep the gun secure.

For my "usual" day, I strapped on the holster and loaded into the car.  My parents' place is 73 miles from our apartment and I usually don't wear my gun in the car because it's uncomfortable as hell, but I wanted to treat the holster like I did when I was able to carry all the time, so I hopped in the car with it.  I carry just behind my right hip, at 4 o'clock.  It took just one adjustment as I buckled up to settle the holster and gun in.  And then I forgot it was there.  It was hands-down the most comfortable holster I've driven in to date.

Once I got to my parents' place, I went about my usual daily activities.  For the most part, the holster was comfortable, but I did feel some pressure along the top of my SI joints.  I didn't know if it was because of the belt I chose to wear that day, or the holster, so I decided to change belts for the range day.

I figured that if anything was going to test the holster during my "usual" day, it would be riding.  I grabbed Estes and mounted up.  The holster was comfortable and secure during my short ride. 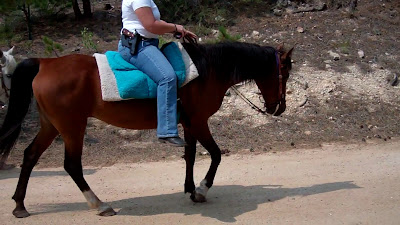 Later that day, we went for a much longer ride, in which I did not wear the holster because we rode into the National Park, where carrying is forbidden.  However, I would have been perfectly comfortable wearing the holster for the five and a half hours we were out - I'm certain of it.

So far, so good.  I finished day one happy with the holster and was looking forward to getting to take it out to the range.

My plan for the range day was, as I said, FitShot lite.  I had not done any practicing with the holster.  I strapped it on, slipped my gun in it, and that's it.  The FitShot workout I had in mind was:
It's not a huge workout, but it does involve a fair bit of movement and I'll use it with every holster review I do.

I changed my belt to the web training belt I usually wear out to the range.  Doing so alleviated the pressure across my SI joints that I noticed on my first day of wearing the holster.

When I got to the range, I handed the video camera off to Tara and told her to video tape me as I went through the FitShot.

I so, so wanted to love this holster, but the snaps coming undone were pretty much a deal breaker.  The workmanship on the holster itself is top-notch.  It carries comfortably.  Even after the snaps came undone, my gun was secure in the holster.  But the holster wasn't securely attached to my belt anymore.

Luckily, I think this is an easy fix for Dragon Leatherworks.  Replace the current snaps with sturdier snaps and this holster again moves to the top of my "favorites" list.  I don't mind having to work at unsnapping snaps; it means that they won't come undone at an inopportune moment.  If I can't get a snap undone, it's not the end of the world - I just thread my belt through it like I would a belt holster.

Pros:
Cons:
Overall, this is a good holster and the fix is easy.  If you're in the market for a leather holster, this is one from Dragon Leatherworks is a good option.

Question for you: What do you look for in a holster?  Do you have an immediate deal breaker?
Posted by GunDiva at 10:32 PM

Question for you. What is that L shaped strip of leather that comes down off the trigger guard and meets up with the bottom of the front strap? Can you add a photo of the other side? My immediate deal breakers are flimsy leather and crappy construction and after that I'll critically analyze a holster.

I think what you're talking about is the second snap strap. We're used to there being a solid piece of kydex or leather on the person side of the holster, so not having it there makes it look different.

Dennis removed that to allow a full grip, what he calls a combat cut.

I'll try to get pictures of the other side tonight and add them to the post.

Dennis, does absolutely fabulous work and I bet he is grateful for your feedback.

Thanks SO MUCH for the testing and review! I've gone ahead and watched that video a few times, donned my own copy of the rig here and did the whole *tuck and jump*, and figured out what the problem is.

Here's basically what happened with your rig:

When you jump up from a tucked position, the gun has upward motion (Issac Newtons law of Motion...an object in motion tends to stay in motion). When *you* begin your downward decent (gravity) the gun is still moving upwards in the holster, which naturally pulls it away from your body. This has the same effect as pulling the snaps apart.

Those are one of the heaviest-duty snaps out there, so upgrading isn't an option. But, making the snaps into their own loop (think *miniature belt*) and then stitching that loop onto the holster, so that instead of the snap being *below* the beltline its *behind* your belt, then it can never unsnap. Physically impossible to unsnap.

Dennis is going to re-work the holster and I will try out the new one, using the same set of tests. He does do good work and I'm looking forward to the new, improved holster.

A win-win. Looking forward to yours eyeing how the changes work.