I took My Favorite Student (I'm still looking for her shooter nick name) to her first action pistol match.  As you may recall, she had approached me a couple of months ago about shooting pistols in competition and I couldn't have been happier.  I asked some very knowledgeable shooters for training advice, and most of what I got ran along the same lines of, "keep it fun".  This advice turned out to be sage so I thought I'd share our journey to this point.

My youngest (11 year old) daughter is a competitor, running cross country, 5K's, playing soccer, and competing for grades, and having fun is very high on her score card.   I coached her soccer team and I learned that kids like structure so like soccer practice, we set a time to go to the range for an hour a week, once a week.  She shot only bulls eye style targets and the focus of the range time was working the marksmanship fundamentals.  Sight alignment, trigger press was the order of the day.   I emphasized aiming as a two step process...1. sight alignment, 2. sight picture.   I placed the targets at different distances, but nothing too far out.   I know to keep her interested and excited she needed to feel successful, so we started close only about 10 feet away and moved the targets back to 25 feet as she mastered the closer targets, and we'll continue to push them out further as her skills develop.  In action pistol shooting it's pretty common to shoot targets from mere feet away up to 20 yards.   She would shoot about 100 rounds during the range time and if she appeared to be getting fatigued holding the gun I'd have her set it down for a few seconds.  She loaded her own magazines and became adept at managing her gun's safety. We were never be in a hurry and never got so wrapped up in the process that it took away from the fun. 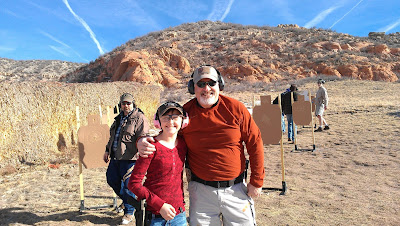 We set about teaching her to shoot handguns around Thanksgiving, rifles were something she's been shooting for about 2 years, and she had no problems transitioning to handguns.  We kept it simple, we went with a 22, low recoil, low noise and very accurate.   The original gun was a Ruger MK II, but we found it had two things working against it.  The most obvious to me was the weight of the gun and secondly was the European magazine release latch.  These two attributes were enough to abandon this gun in favor of a MK III light weight 22/45.   This gun gives her the same controls as center fire guns, and weighs in at 22 ounces, so the weight was something she can handle.   The Ruger MK III line has a reputation as being well built and durable, but having said that, find a brand of ammunition that is accurate, reliable and feeds well - then stick to it.   Much of the bulk ammo has issues with misfires and feeding, while this might augment training drills -  dealing with outages, it is an advanced skill set and not a basic skill.

We visited the range only 4 times before deciding on a match.  After deciding on the match we worked on some dry fire practice and she learned how to draw from holster.   We put a green magnet on a fling cabinet at the other end of the basement and she would draw, obtain a sight picture on that green magnet and then holster her gun.  I tried to stress efficiency of motion and she repeated this process for 10 minutes and was done.   She performed this practice for two days before the match, but this is part of her weekly practice.

A couple of notes for clarification, we're not shooting NRA Action Pistol, I'm using action pistol as a generic term.  The match we shot is run by a local club ( http://www.ncrgc.org/defensive-pistol ) and is not affiliated with IDPA, USPSA or IPSC.  I want her to learn the movement and basics and not worry about the rules at this point.   The organizations I mention above are fine groups, but for new shooters they often remove a lot of the fun from the match with the rule book.

The first video above shows stage 3 of the match.   On this stage, the shooter shoots each target 3 times, what you can't see is that the third target is all head shots while avoiding the "hostage".

The video just above is the first stage of the match and the shooter is to place one shot into the body of each target (6 targets), repeat the process for a second round of body shots, and last round is head shots, for a total of 18 rounds, no make up shots could be made.  The point of this stage is moving your muzzle and working transitions between targets.


On the right, me shooting the same stage.

I hope she finds the same love of this sport as I have.  Some items we are going continue to work on, she'll take responsibility for his/her own gear, I left her spare magazines at home and thus can be seen frantically reloading her mag in the middle of the course of fire.  She'll learn how to critically analyze her gear failure and learn to remedy those failures.  She'll sit in on a Basic class, and we'll go through the Tactical Skills shooting drills privately, each shooter cleans his/her own gun and gear and most importantly, we'll continue having fun. 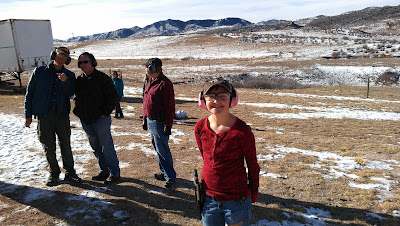 *Shooter nick name suggestions can be left in the comment section.

Hope to see you at the range soon,
Double Tap
Posted by Double Tap at 7:49 AM

I love this!! Thanks for sharing!!!

My middle daughter wants to try her hand at competitive shooting. She is also motivated and loves to compete, but it must be fun!

We are still in the research phase.

Well, Tin Can Assassin is already taken by a blogger. It would help if we had a little more info. Like her initials, favorite color, favorite foods, etc. for instance, young pasta lover might enjoy Spaghetti Western as a shooter nickname.

I didn't realize that they were now allowing .22s at action pistol. Maybe I should attend a match here and again :)

I'm super excited for both Daddy and daughter.

GunDiva, M&M is walking quite well; however, it'll be a while yet before she has big enough hands to hold a firearm. Rest assured she will receive proper instruction as soon as she is able to learn.

DT, you so need to load some ammo with glitter mixed into the powder. That would be awesome.