GunDiva
I've heard about how wonderful Media Day is for years.  I couldn't believe it when first, my credentials were approved to attend SHOT Show as media and then, when I got my confirmation for Media Day.  I was floating on air for a week.

Media Day was cold.  And windy.  Which made the cold worse.  I made the mistake of taking my "girl" coat to Vegas instead of my Carhartt.  I knew I wouldn't be able to shoot in a fitted coat, so I layered up with a long-sleeved t-shirt, another t-shirt, and a zip-up hoodie.  I was freezing.

We got to the range an hour late, because I'd decided earlier that day to take the shuttle instead of driving.  After waiting for the shuttle for almost an hour, we found out that it would still be another thirty to forty minutes before it would arrive, so we went back to the original plan of driving to the range.  I won't make the same mistake next year - we'll drive to the range so we can use all of our allotted range time.

Never having been to Media Day, I wasn't sure what to expect.  Because of this, we didn't really have a plan.  Again, next year, we'll go armed with a plan of what we want to shoot.

At the Daniel Defense booth, I got to shoot my very first automatic rifle.  What a rush that was!  As I was getting ready to shoot, I could hear some guy in the background say that I'd better get a good hold of the rifle, as it was going to be too much for me to handle.  Ha!  Yes, it walked up the berm on me, but once I got the hang of the trigger, it was no big thing to keep it under control.

SOG had a throwing range set up, so I wandered over there and got a quick lesson on how to throw knives.  I'm not very good at it, but I'm not too disappointed considering that I couldn't feel my fingers.

At KRISS, I got a quick tutorial on their Vector.  The Russian gentleman was willing to give me the tutorial, but when it came time to change the magazines, he told me, "I change magazine".  I giggled inwardly and allowed him to change the magazine for the little lady.  The Vector was not nearly as much fun as the Daniel Defense in full auto.  In fact, the stock was uncomfortable and slapped my cheek a bit, despite having a good cheek weld.  However, I am proud to say that I wasn't pushed around by it like a guy who shot after me.  He was literally pushed back three steps when he went to full auto.  The range officer wasn't pleased.

The gun that was my "must shoot" was the new GLOCK 30S.  I've always loved GLOCKs, but switched over to a 1911 a few years ago because the GLOCK didn't fit my hand.  I was excited to shoot the 30S.  It still doesn't fit my hand as well as the 1911, but it does fit much better and is going on my "guns to buy" list, right toward the top.

I also shot an FNH 1911, but wasn't excited about it.  The deep stippling on the grip was uncomfortable, and I didn't enjoy the trigger.

I didn't get to shoot nearly as many guns as I would have liked.  The loss of an hour at the beginning of our range time, coupled with the fact that a lot of booths were packing up early because of the cold meant that we were limited in our choices.  I got excited, because I saw JJ Racaza at the Caracas booth shooting with someone and headed over there to try out their guns, but before I could get there, they started packing up.

Fun? Yes, but could have been better.

Disappointing? Yes, but could have been worse.

The three of us had decided to catch one of the shuttles out to the range and abandon our original plan to drive ourselves - our first mistake. We stood around waiting for a shuttle that was running ridiculously late. In fact, we didn’t wait for it and decided to drive ourselves out to the range. The map we had wasn’t very detailed so we missed our turn for the range, costing us more lost time. All in all, we arrived to the range an hour late. Now we only had two and a half hours, or so we thought, to see and shoot everything we wanted to. Shouldn’t be an issue, right? I leave that alone for now; let me move on.

Can I tell you that I feel I’ve been lied to somehow about the desert climate. Perhaps a misconception on my part about what to expect from desert weather, or maybe I can blame my 6th grade geography teacher, but I thought the desert was supposed to be warm (if not hot) by four in the afternoon, even in January. It wasn’t. It was mid 30s, which isn’t so bad, but you add some 25mph wind to that and the conditions become downright miserable. Not wearing the proper outerwear was our second mistake (for GunDiva and myself anyway, Mez was better prepared). But, we weren’t going to let that dampen our spirits and we hit the range running. Daniel Defense was the first stop and my first experience shooting a fully automatic and suppressed rifle. The ISR in 300 Blackout. Definitely something I will remember for years to come. I sent 10 rounds down range and was off to a good start. 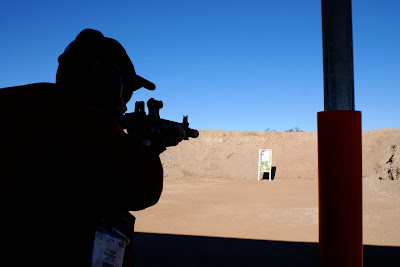 However, I slowed down just as fast. I retreated to only shooting photographs of Mez and GunDiva. I did, however, fire Glock’s new 30 S and a .45 offering from FNH and wasn’t particularly impressed with either. Honestly, I could barely feel my thumbs and index fingers. That damn wind just chilled me to the bone. I’ll never take the desert southwest’s weather for granted again. Next year I’ll be prepared.

Remember my assumption that we would have a full two and half hours of range time left to squeeze as many triggers as possible. We were wrong…and this was probably the most disappointing thing about “Media Day”. Vendors were packing up early due to the wind and many were gone before we arrived. I feel a little cheated by losing an hour on the front end, due to the shuttle fiasco, and almost an hour on the backend due to the cold windy weather. I know that had the weather been perfect or even less than desirable my entire experience would have been different. And, that is what I hope for when I go back next year.

Don't forget about our give-away, be sure to click on over and enter.
Posted by GunDiva at 9:12 PM

Sounds like a great time, but hearing about the weather I am actually a tiny bit less jealous than I was. I really hate cold wind. It whips right through me.

I so want to get to go to the range day next year, fingers crossed! I, too, was stunned when I got there and it was 29 degrees!!!

I have a SOG, and LOVE IT! Sounds like you had a great time!

Despite the cold, Media Day sounds like a great time. I'm putting this on my Bucket List!