I spent years trying to find the holsters that would allow me to carry my guns discreetly without changing my wardrobe. I know a lot of people are told to "dress around the gun", but that's dumb. I have a uniform I wear at work, so "dressing around the gun" is bullshit advice. Luckily, as more women have entered gun culture, they also thought it was bullshit advice and began designing holsters that work with the clothes we already own and wear.

Now that I've settled into my concealed carry holsters, I want to be able to carry a tourniquet (TQ). I've been thinking about it for a while. I own a tourniquet, but it stays in my shooting bag. I'd rather have it on me in case I need it. The Las Vegas shooting really drove that point home for me. I tried carrying my holster (C-A-T) in my Hip Hugger, but that didn't work out. It was either jabbing me or sticking out like a growth, neither of which I liked.

I remembered seeing that Rob Pincus (and, I believe, Grant Cunninham as well) had talked about an ankle carrier for his TQ, and asked about it on Rob's FB page. I was directed to Safer Faster Defense and their Responder.

I had some issues getting my order, but once I was able to get to the owner of the company, he was wonderful to work with and kept me updated on the progress of my order. I understand that his company is new and growing, and I had anticipated some delay in my order since I placed it the day of the Las Vegas shooting. It took from that day until the week of Christmas to receive my order, but like I said, the owner of the company was great to work with and kept me updated. I hold no ill-will toward him for the delay.

The Responder is exceptionally well-made and comfortable. I wore it around the house for a few days, just to get used to it, before I added the TQ. I knew from the onset that it was a bit too big, but thought I could work around it. I could tighten it around my ankle, but the width was too tall and the bottom of my calf kept forcing it down to rub on the top of my shoe. Even with that, it wasn't uncomfortable at all. 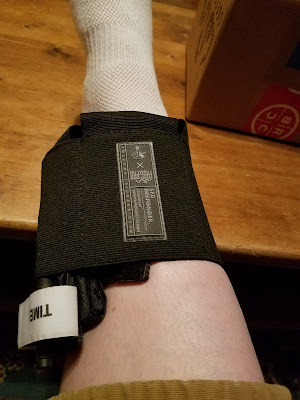 I added the TQ and work it around the house for a few more days. I didn't leave the house much, since I'd taken vacation time over Christmas. When the day came that I had to leave the house, I slipped it on my ankle and smoothed my pants over it. It was then than I realized that it wasn't discreet at all. In fact, I looked like I had a big ol' tumor on my leg. 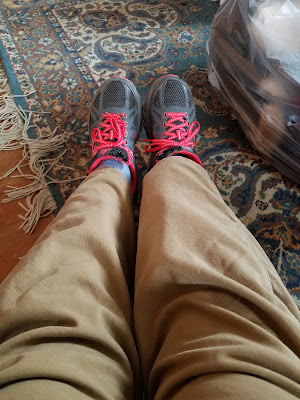 I chalked it up to my fleece-lined pants not draping properly. Since I was headed to the range, I didn't bother to take it off, just wore it any way. I'm sure it looked like I was carrying a gun on my ankle instead of a holster, but at least I had it with me, and I was at the range, so no one was going to care if I had a gun strapped to my ankle.

The next day, I added the rest of my kit to it: two chest seals, and an Israeli bandage. (My QuikClot gauze hadn't arrived, and what I had in my trauma kit was years expired.) I know there are some who wear the Responder with everything I'd added to it and more, but I'm not quite sure how.

I looked at the bulk, sighed, and strapped it on anyway. It wasn't as uncomfortable as I thought it would be, so I tried to pull my pant leg down over it.

I pulled the chest seals and bandage out of it, and put them in a gallon Zip-loc bag that went into the side pocket of my range bag. I kept the TQ in the Responder and wore it the rest of the day, ignoring the fact that my leg looked terribly distorted.

When I finally had to return to work after vacation, I put my scrubs on over it and hoped I was just being oversensitive about it showing. Luckily, it was a fairly light day at work, but almost every single one of my coworkers asked how I'd hurt my ankle. They saw the bulky black material and assumed I had an ankle brace on. Yay for them seeing what they expected to see (an ankle brace), but boo for it being that noticeable.

As much as I like the idea, the Responder is just not going to work for me.

What I really want, I've decided, is for Can Can Concealment to make a TQ carrier. They do such an amazing job with their concealed carry line, that I'm certain they can do something about this as well. My primary issue is that the Responder just doesn't fit - it's too wide and hits my calf. Secondarily, it's too bulky when fully loaded, though I'm not sure how to fix that.

Dressing around my TQ (and my gun) is not an option for me, so this is one of the times when I'm quite jealous of the deputies I occasionally work with - they keep all of their tools on their belt and don't have to worry about being discreet. Holster manufacturers have done an excellent job of making good concealment holsters for women, let's hope they start looking at making something for TQs (or even complete IFAKs).

When we're at SHOT Show next week, I'm going to make a point to stop by the GunGoddess booth to see if I can fondle one of the Can Can thigh holsters. If I get one small enough, I might be able to make it work for my tourniquet.
Posted by GunDiva at 8:00 AM