Today, we were privileged enough to attend Industry Day at the Range. It's always a good time (who doesn't like to shoot other people's ammo?).  Here are some quick highlights, in case I fail to get more thorough posts done once I'm home.

Decibullz is a Fort Collins-based company that has been around for a while, though they're just now getting into the ear protection game. They were kind enough to offer free custom-molded ear plugs to the attendees today. We didn't run into them until later in the morning, but quickly switched out our "foamies" that we got at the front gate for our Decibullz ear plugs and wore them the rest of the day. Their basic model worked very nicely for the range; they have a different model that we'll be discussing in the future. Since we're from the same geographic area, I'll be scheduling a post-show interview with them. 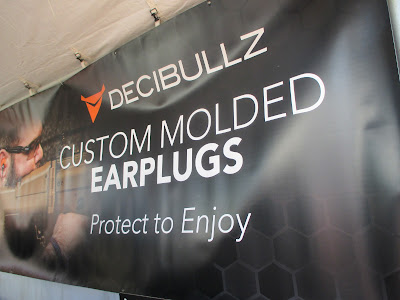 Though I'm not a long-range shooter, Mez talked me into shooting the new .224 Valkyrie. They had the target out 960 yards, and I'm not a long-range shooter, but I'm happy to say I hit all but one (and that miss was barely a miss). I struggled initially with the trigger, as in, I couldn't reach the freaking thing. Could not reach it. At all. They instructed me to use a strong-side only hold, with my thumb alongside the stock instead of wrapped around the handgrip. It was a soft-shooting round and easy to manage. I'm certain Mez will write more about the ballistics of this round/gun. 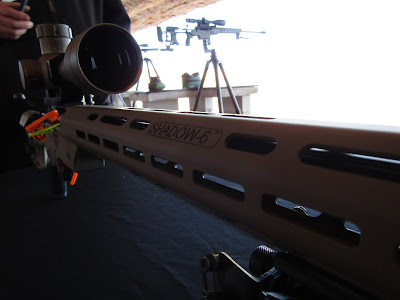 My "must shoot" list was pretty short - I need a new duty gun, so I wanted to check out the M&P 2.0 compact. I've shot a few rounds from one of the range team members, but the more I get to handle it, the more convinced I am that this is the gun I need. While I was up there, I thought I'd try the M&P Shield 2.0 as well. I carry my G42 daily, but would really like to upgrade to a 9mm. I planned on just going up to a G43 (because deep in my heart, I'm a Glock girl), but the Shield might be a contender. I'll have to shoot them side by side before I make a final decision. 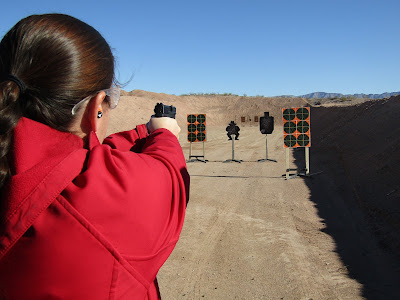 Again, on Mez's recommendation, Jay and I ducked into the Hudson stall to shoot their pistols. Immediately, I was freaked out by their triggers. I've shot Glock "safe action" triggers since I started shooting, I'm comfortable with the M&P hinged trigger, but this Hudson trigger was just weird. It hinges from the bottom of the trigger. It is supposed to make the trigger reset easier to attain, but while demonstrating it, the Hudson employee had an ND into the dirt just in front of us. Imma go ahead and say, that's not the gun for me. The boys, however, liked the gun.

And just for giggles, here's a cute dog picture.

+1 on the M&P 2.0. Huge improvement in the triggers over the 1.0s. Could still benefit from an Apex kit, but perfectly serviceable as is.

Now, a request. I need you to buttonhole a S&W rep on these two questions:

1) is there going to be a 2.0 Compact in .45?, and
2) when is Smith going to get off their ass and put out a pistol caliber carbine using M&P magazines?

Dang it, Daddy Hawk, I didn't see this until we were "home" from the show floor.

Mez, Jay, and I are headed home in the morning. Robbie is going to corner the S&W rep tomorrow and try to get answers for you.