OK, we just wrapped up another SHOT show for 2018.  Here are some of the items we were able to test fire at Industry day.
Unfortunately there is never enough time to see everything.  These are just the highlights of what we were able to shoot.

1.    First up, is Springfields famous M1A rifle.  What is new for 2018 is it is now chambered in 6.5 Creedmoor. This is an awesome combination of rifle and cartridge.  The mild recoil of the 6.5 Creedmoor makes the M1A a very soft shooting rifle.  I enjoyed shooting this rifle.  There are currently two variants.  One with the JAE precision stock and the other with the traditional black polymer M1A stock.  Both utilize a medium weight stainless steel barrel.
If you want an M1A but better ballistic performance and less recoil, look to the 6.5 Creedmoor version of the M1A.

2.    Next up is the new 911 pistol.  This is Springfields version of the old Colt Mustang Pocket .380 pistol.  You will notice it is very similar to the Sig 238. The main differences are the 911 has a larger trigger guard, slightly larger ambidextrous safety and the slide contour is uniquely Springfield.  Otherwise the two pistols are similar in size.
Overall, I enjoyed shooting this pistol.  It is pleasant to shoot, mild recoil, good texture on the grips and shot where I aimed it.  Even though it is a Johnny Come Lately entry into the pocket .380 market, I think it is a welcomed addition to the Springfield line of pistols. 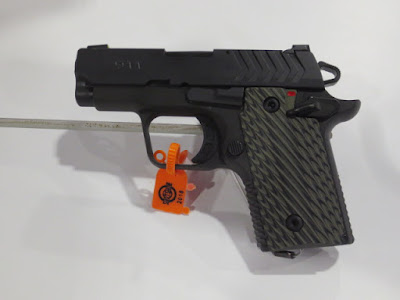 APO is a maker of high end precision rifles and accessories, including rifle receivers, Tripods and mounts and even rifle chassis for your existing rifle.
What caught my eye was they had bolt action rifles chambered in the new .224 Valkyrie cartridge.  So I had to stop by to see what the hype was with the 224 Valkyrie.
APO had their 224 rifled dialed out to 960 yards.  So that is what we shot.  The APO rifle was a joy to shoot.  Very nice, everything was smooth with an excellent trigger.  I would say if you are looking for a high end precision rifle, APO should be on your list of manufacturers to look at.

The 224 Valkyrie cartridge performed as intended.  Tagging the 960 yard plate was easy.  With the extra light recoil of the 224, I was able to spot my own hits in the scope.   I think the extra light recoil is what will make this cartridge popular amongst 1000 yard shooters.  There are many cartridges out in the market that will do everything the 224 Valkyrie will do, but with more recoil.

What makes the 224 Valkyrie unique is that it was designed to fit into an AR15 rifle. This makes your AR15 a true 1000 yard rifle.  Something other AR15 cartridges such as the 6.5 Grendel or 6.8 SPC can do, but the 224 Valkyrie does better.  The 224 Valkyrie stays supersonic out to 1300 yards (at sea level).  This is why it is a better 1000 yard cartridge for the AR15 platform.  Combine this with the low recoil and you have a unique performance cartridge.
Factory ammunition is readily available from Federal.  Federal has 4 loadings from 60 grain to 90 grain projectiles designed for hunting to long range target shooting.

Check out the new 224 Valkyrie if you want use your AR15 for 1000 yard shooting.  And if you want a matching bolt action rifle to match your AR15, look at Ashbury PrecisionOrdnance.

If we can get the stupid gun laws repealed in this country, I see this being the future of rifles.  The barrel and suppressor being one unit.
Until the laws are change, you still need to get the tax stamp to own one.  Otherwise I love this idea. 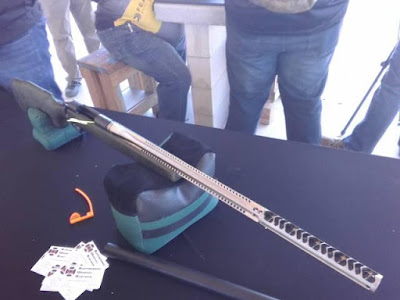 Here is another entry into the Combat Tupperware game.  The Archon Type B.
At first I was skeptical because there are so many variations on the Glock style.  But I was pleasantly surprised when I fired this pistol.  It has a low bore axis.  Good texturing on the frame.  Much better than a stock Glock.  The frame was comfortable to grip in the hand.
Overall, the Type B shot very well.
If you are looking for a striker fired pistol and don’t like the typical options, take a look at the Type B from Archon Firearms. 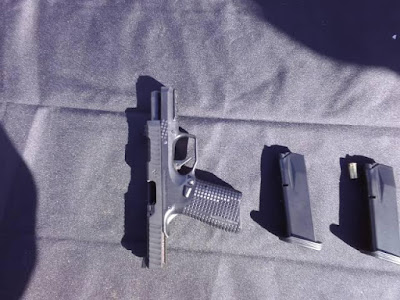 Here is a unique pistol from Hudson Manufacturing.  The Hudson H9 is a unique pistol.  The best way to describe it is a Glock and a 1911 had a mutant child.
It is a striker fired pistol, similar to a Glock with the frame angle/shape and single action trigger of a 1911.  Essentionally combining some of the best features of each pistol.
I found the H9 to be comfortable to grip and to shoot.   The H9 does have a unique trigger design.  The trigger press is a nice single action similar to a 1911, but the trigger is hinged from the bottom.  Something I have not seen before in any other pistol.  I had no problems with the trigger hinging from the bottom.  But some of our team members expressed they did not like it.
The current model is a steel frame and slide.  In a few months they will be shipping an aluminum frame model which will be approximately 10 oz. lighter than the steel frame model.